Directed by Majid Majidi
A spiritual masterpiece on gratitude, transformation and surrender to God.

Youssef (Parvis Parastui) was blinded by an accident when he was eight years old. Now 38 years later, he teaches literature at the university, has a loving wife (Roya Taymourian), and a little daughter who just can't get enough of him. On the surface, Youssef deals rationally with his disability but inwardly he is angry with God. Now he has a tumor beneath his right eye, and his uncle has gotten him an appointment in Paris with a special clinic for eye surgery. Just before he leaves, Youssef writes a note to God and tucks it between the pages of a volume of the Mathnawi, the mystical masterpiece by the Persian Sufi poet Rumi. The note says:

"I'm the one you deprived of the beauties of the world and who never complained. Instead of light and brightness, I lived in darkness and gloom and I didn't protest. I found happiness and peace in this small paradise. Are all these years of suffering not enough that you now want to cause me even more suffering? Will I come back from this trip to my loving family? Will this illness bring me to my knees? To whom should I complain about what you are doing to me? I beg of you to show me more compassion. Don't take my life away."

The doctors at the hospital in France do a battery of tests on his eyes. He meets a man who is slowly losing his sight due to some shrapnel in his head from the Iraq/Iran war. He takes Youssef on walks in the woods and shares walnuts with him. He totally lives in the present moment and is a very grateful man who treasures the gift he is about to lose.

Youssef is thrilled when the doctors discover that his eyes are sensitive to the light and that the optic nerve may not be too badly damaged. They decide to do cornea transplants on both eyes. The night before his bandages are to be removed, Youssef lifts them gently and realizes that he can see. He watches as an ant carries a morsel of food across the window ledge. The miracle of sight makes him giggle with glee at his good fortune as he hobbles down the hallway without needing anyone else to help him along.

After recuperating in France, Youssef returns to Teheran. At the airport, a crowd of well-wishers have gathered to see him. Among their number are those closest to him whom he has never seen: his wife and daughter, his students and friends from the University. He does recognize his mother, who gave him a prayer before he left for Paris. Another in the crowd catches his eye. She turns out to be Pari (Leila Otadi), his uncle's pretty wife. He is stunned by her beauty and can't get her out of his mind. At home, Youssef touches the familiar objects in his study and tries to figure out what to do with himself. He feels cut off from his wife who throughout their marriage has been his caretaker.

In this new world of sight, Youssef finds himself isolated not only from his wife but from his old job. He announces that doesn't want to return to the university. One day on a subway, he watches as a young boy steals a wallet out of the back pocket of another passenger. Youssef remains detached and doesn't say a word. His infatuation with Pari grows as he keeps a picture in his desk and listens to a phone message from her in which she describes wanting him to read her dissertation on the mystical poets. His wife suspects his obsession with Pari and moves out after he criticizes her for being nothing more to him than a mother that he no longer needs.

Majid Majidi is an Iranian director whose deeply spiritual films include Children of Heaven (1997), The Color of Paradise (1999) and Baran (2001). The Willow Tree won four awards at the 2005 Fajr Festival in Tehran. In a statement on the film, the writer and director has stated:

"A few years ago, I met a middle-aged blind man who had an amazing experience in his life, dealing with blindness and sight. As I was talking to him, I began to ask myself about the difference between perceptions of beauty and serenity in the real world and the world of the blind. After he talked more about his experience, I realized that when a man recovers his sight, there is an inevitable conflict between these perceptions. For Youssef, the blind man of my film, serenity comes from his little balcony, the sound of nature and the angelic voices and touches of his family. The beauty is in his mind and ugliness does not exist. He is like Adam in the garden of Paradise, both protected and powerful. I wanted to explore what would happen to his serenity and his sense of control if he were taken out of 'Paradise.'

"When Youssef is exposed to the visual world, the beauty he encounters is compelling and frustratingly elusive. Ugliness and strangeness is everywhere. The aggressive presence of the world gradually silences the dialog he had with God and himself. I realized that when a man becomes deaf to his inner dialog and ignores the positive messages the world sends him, the only actions he could do would be selfish, violent, and destructive. When fate tests us, our life, if not built on firm foundations, often collapses. For Youssef the tests that life put on him reduced him to the powerlessness of a small creature of God. I still wonder what this child-man would do with the new life he is now begging for . . ."

The Willow Tree is a spiritual masterpiece that deals with subjects dear to the heart of Sufis and celebrated in the poems and other writings of Rumi: gratitude, transformation, and surrender to God. Youssef moves from a world of darkness where he relies on his senses and his connections with others to a world of light where he relies on sight and winds up falling quickly into selfishness and detachment. Youssef carries his anger into his new life, and it obliterates the gratitude he had for his little paradise of the past.

And yet he yearns to be and feel differently, and he realizes that the only way there is through sacrifice and surrender. A hagiographical account of a meeting of Rumi with the wandering dervish Shams-i Tabriz, who would become his soul companion and totally transform his life, has Rumi sitting with his students surrounded by his books. Shams appears and asks, "What are these?" Rumi replies, "You wouldn't know." At which point the entire library bursts into flames, and Shams says, "You wouldn't know either." In another version of the story, Shams tosses all of Rumi's books into a fountain. We thought of these stories during a critical scene in The Willow Tree.

Majidi opens our eyes to the difficult process of surrender to God. It's not surprising that Rumi's Mathnawi makes a second appearance in the film, as the mystic sees surrender as the key to everything. Youssef goes through a series of physical and emotional transformations, but it is the last one, the spiritual one, that is the most important. 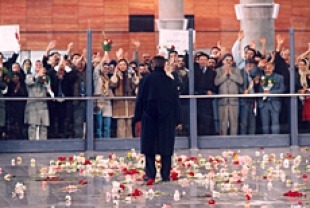 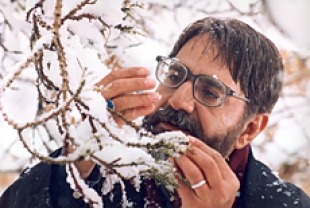 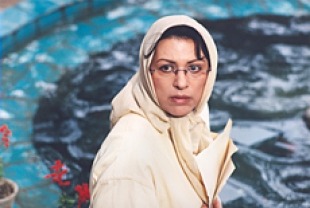