Directed by Eran Kolirin
A deeply spiritual comedy about the bridge-making capacities of hospitality.

In her book Every Day Hospitality, Simple Steps to Cultivating a Welcoming Heart, Thea Jarvis writes: "Hospitality may be a familiar, old-fashioned virtue, but it hasn't gone out of style. In our homes and communities, schools and churches, families and neighborhoods, hospitality remains the glorious centerpiece of the human dinner table. It's the flag we rally around to remind ourselves that we're all in this together. It's the sturdy thread that binds us gently to each other."

We agree, but in many communities, there is still an omnipresent fear of the stranger, an attitude that has been given credence by the culture wars, real wars, and the so-called war on terrorism. An outsider could be the evil-doer bent on our death and destruction. And so millions of people around the world shy away from the natural impulse of hospitality; instead of building a house of love, they construct a house of fear. This is the backdrop to Eran Kolirin's spiritual film The Band's Visit about the challenges faced by an Egyptian police band when they arrive in Israel to play at the opening of an Arab Cultural Center. They are strangers in a strange land.

Tewfiq (Sasson Gabai) is the conductor of the Alexander Ceremonial Police Orchestra. He is very worried about the group's future given budget cuts and other factors threatening its existence. When he and the band members arrive at the airport in Israel, no one is there to meet them. Tewfiq dispatches Khaled (Saleh Bakri) to get directions to the town where they are to play. But instead of concentrating on the details, he tries to romance the female clerk with his rendition of a favorite love song. The band takes a bus to a small, out-of-the-way desert town and once again, there is no one there to meet them.

Dina (Ronit Elkabetz), a vivacious manager of a café, gives them some food. Tewfiq is quite distressed to find out that there are no hotels or inns in the town and no bus until the next morning. Dina invites Tewfiq and Khaled to stay with her and convinces a regular at her café to take a few band members to his home. The rest stay in the café overnight.

Dina invites Tewfiq to go out with her. He is definitely not used to being with a woman who exudes sexual allure and takes charge of everything. She queries him about his life, and it takes the reticent band conductor a long time to reveal the source of his melancholy: the suicide of a son he pushed too hard and the death of his wife. Although Tewfiq loves music, he is more enamored of fishing.

Khaled, meanwhile, goes along with Papi (Shlomi Avraham) and his date to a roller disco. There the Arab ladies man tutors the socially awkward Papi in the art of seducing a shy young woman. Simon (Khalifa Natour), Tewfiq's assistant, spends some time with an Israeli family. Itzik (Rubi Moscovich), the host, hasn't worked for some time, and there is tension in the home about that. He remembers being impressed when Simon played part of an unfinished composition on his clarinet at the café. In a bedroom, Itzik suggests that his new friend shouldn't end the piece with fanfare but with something like what's there — "not sad, not happy, a small room, a lamp, a bed, a child sleeping, and tons of loneliness."

Novice director Erna Kolirin has fashioned a deeply spiritual drama about the bridge-making capacities of hospitality and the way music serves as universal language that draws people together. Instead of making a message film about Arabs and Jews, Kolirin has made a comedy filled with lovable characters struggling to communicate with those from a different culture and religion. They reach out to each other in simple ways: singing "Summertime" around a kitchen table, listening to the cadences in the Arabic language, and sharing a moment on a park bench. The cause of peace is nurtured in such soulful moments, and our hearts are lifted as we watch them unfold.

Special DVD features include "The Band's Visit: Making The Fairy Tale" and a commentary by director Eran Kolirin. 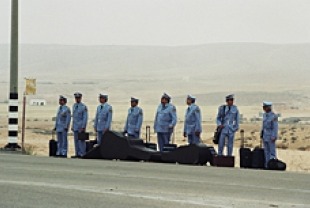 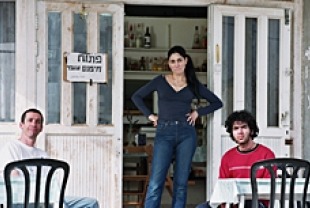 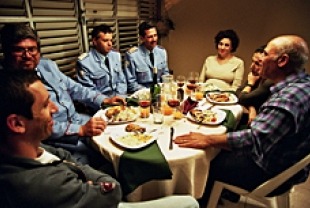 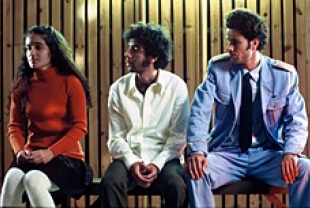 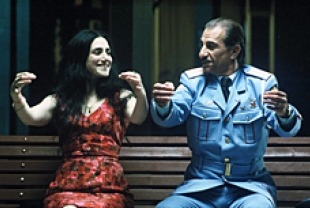