Directed by Rob Reiner
A delightful comedy about two dying men who travel the world to discover the joy in their lives.

Carter Chambers (Morgan Freeman) has an obsession with facts and the small details of the human adventure. He grew up wanting to be a history teacher but married early, had a family to support, and wound up working as a mechanic in a garage for the past 45 years. He loves out-guessing guests on the TV show "Jeopardy." Those who know him are amazed at his knowledge of trivia. For him, it helps make the journey enjoyable.

Carter's pleasure in life is cut short when he is taken to the hospital and diagnosed with cancer. His wife Virginia (Beverly Todd), a former nurse, visits regularly, but there is a chilliness between them when it comes to discussing what is happening to him. While waiting for the final test results, Carter watches his new roommate, Edward Cole (Jack Nicholson), a corporate billionaire who owns the hospital, being prepped for surgery. He is a cantankerous fellow who has no visitors except his assistant who manages his voluminous business affairs.

One day Edward notices that his roommate is writing notes on a yellow sheet of paper. Later, he finds it crumpled up the floor and sees the lines: "Witness something truly majestic. Help a complete stranger." Edward asks Carter what it all means and he tells him that when he was in college his philosophy teacher said, "Make up a list of the things you want to do before you. . . ." "You mean kick the bucket?" Edward intercedes. Carter says, 'Yeah. When I was young I had to be the first black President. Make a million dollars. Now I thought I'd make a different list and see. But it's pointless because we're going to die."

Edward disagrees and decides to add a few of his own wishes to the list such as "Sky-diving. Kiss the most beautiful girl in the world. Get a tattoo." Since both men know that they are terminally ill, Edward proposes that they leave the hospital and take a trip together. After all, he says, "All I have is money." Virginia is not happy about losing precious time with her husband, but Carter knows what he wants to do.

Rob Reiner directs this comic road movie about two elders who try to make the best of a bad situation and in the process take a spiritual journey that forges a bond of friendship between them. Carter tells his friend that 1000 people were asked if they would want to know about their own death and 96 percent did not want to know the details. These two seniors aren't afraid to embrace the big picture like wise fools. As they embark on their worldwide adventure, we found ourselves asking what we would do in the face of a terminal illness. What would be on our Bucket List?

It's fun to watch Carter and Edward fulfilling some of their wishes: driving a fast car, sky-diving, singing as they drive through the wilds of Africa surrounded by animals, or sitting atop the Pyramids in Egypt. But the quester in Carter always has a new question for his buddy. He claims that the Egyptian gods had two questions for people: (1) Have you found joy in your life? (2) Has your life brought joy to others? Now there's a two-edged sword to cut away all the dreck of existence! Carter professes a faith in God whereas Edward admits that he has trouble with the concept. His belief is: "We live and we die and the wheels on the bus go round and round."

Joy and faith. Now there's two spiritual themes to grapple with after watching this comedy ramble to its surprising and satisfying finale.

Special DVD features include "Writing a Bucket List" with screenwriter Justin Zackham and a music video "Say" with John Mayer. 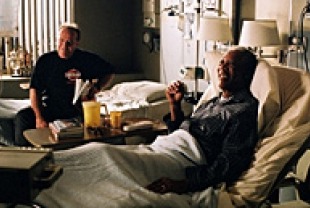 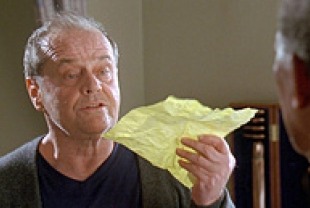 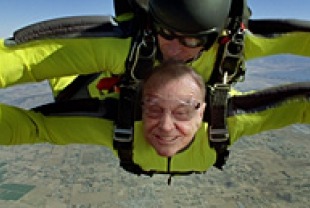 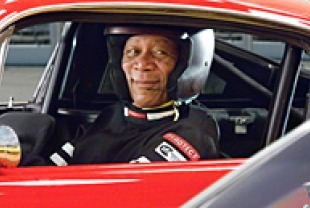 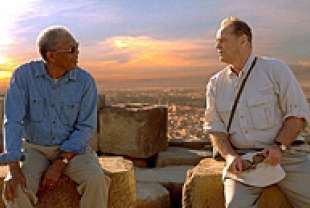 PG-13 - language, including a sexual reference