Bab'Aziz - The Prince Who Contemplated His Soul

Directed by Nacer Khemir
An enchanting and parabolic film about the beauty, grace, humility, and love of the Sufi path of the heart.

With its rich blend of mystical poetry, its diverse literature, its spiritual ethics, and its many musical masterworks, Sufism is a path of the heart that speaks to those who yearn for a closer intimacy with God, a richer interior life, and a repertoire of spiritual practices that give it depth and meaning. Bab'Aziz — The Prince Who Contemplated His Soul is the last film in the Desert Trilogy of Tunisian director Nacer Khemir (The Searchers of the Desert, The Dove's Lost Necklace). This visually stunning film, filmed in the sandscapes of Tunisia and Iran, presents a multi-leveled glimpse of Sufism, the mystical expression of Islam. Bab'Aziz enchants with its beautiful and profound depictions of the love that animates our relationship with the Beloved, with the world, and with our neighbors.

The path of heart is incarnated in Bab'Aziz (Parviz Shahinkhou), a blind dervish who intimately knows the desert and its many austerities and beauties. He is a perfect example of the Sufi adab, a practice incorporating humility, courtesy, kindness, a reverence for the world, and a deep respect for others. With his young granddaughter Ishtar (Maryam Hamid), he is on his way to a conference of Sufi dervishes that takes place every 30 years. Although she is anxious about finding the place and getting there on time as they wander for days over the sand dunes of the desert, he assures her that those who are meant to attend the gathering will find their way there. Bab' Aziz has learned the fine art of surrender to God; someone with his kind of faith doesn't fret about obstacles along the way. He calls Ishtar his little angel and lets her know that the dimple on her chin signifies the grace of God which has blessed her.

To keep his granddaughter entertained on a cold night, Bab'Aziz tells her the story of a prince who one day follows a gazelle across the desert, leaving behind his life of luxury. He is found later gazing into a pool of water; the dervish watching over him explains that he is contemplating his soul. His people are astonished that he could choose the invisible world over the more alluring visible one he had inherited, but they leave him alone.

This tale is juxtaposed with the stories of several other characters, including a red-haired dervish whose sees his job of sweeping in the mosque as an act of devotion to the Beloved; Zaid (Nessim Kahioul), a gifted singer who is searching for Noor, the beautiful daughter of a Sufi songwriter; and Osman (Mohamed Grayaa), who yearns for the palace and the woman he discovered when he fell into a well. The story of the prince and the quests of these three characters all illustrate the yearning that drives Sufis to seek an intimacy with the Beloved. It is a love that will not let them go.

The screenplay, written by Nacer Khemir and Tonio Guerra, is built around the dignity, devotion, and depth of Bab'Aziz. Although he cannot see, he is totally attentive to everything that goes on around him. He is not attached to possessions or worried about the opinion of others. At one point, Ishtar sees a band of pilgrims head off in one direction and wants to follow but her grandfather assures her that everyone must find his or her own way to the conference.

Bab'Aziz even mirrors Rumi's understanding of death as a wedding day. He understands that both life and death are gifts. And so do all the dervishes who offer their dances and their songs to the Beloved when the community of mystics gather at the end of the film. As we watched all the beguiling images on the screen and listened to the impressive soundtrack, we thought of this prayer by the Sufi Hazrat Inayat Khan:

Give me, Oh God,
Deep thoughts
High dreams
Few words
Much silence
The narrow path
The wide outlook
The end in peace.
Amen. 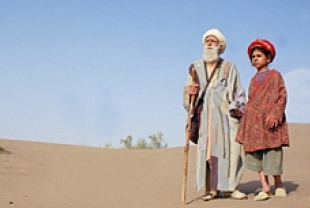 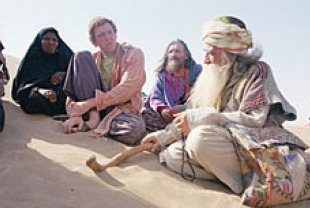 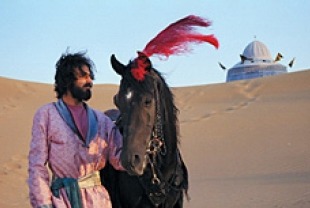 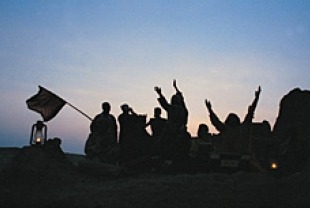