Directed by Adam Brooks
An appealing romantic comedy that will inspire you to retell the story of your own romantic journey.

Will Hayes (Ryan Reynolds) works for a large advertising agency in New York City and has joint custody of his ten-year old daughter Maya (Abigail Breslin). He is unhappy upon receiving the final divorce papers from his wife. At school, Maya has had a class in sex education and she is eager for him to explain some details — like how many women did he "rehearse" with before her mom? Will finally agrees to tell her about his romantic history but he gives her an assignment: he's going to change the names of the women in the story, and she has to figure out which one is her mom. Maya has her own plan: she hopes that when her father revisits the past, he'll rediscover the love he had for her mother and reconcile with her.

Will's romantic excursion begins in Madison, Wisconsin, in 1992 when he is madly in love with Emily (Elizabeth Banks), his college girlfriend. With great enthusiasm, he is heading off to Manhattan to work for the Clinton campaign for two months. Will has big dreams for his own life and even thinks that one day he will run for President! At the campaign headquarters, he is humiliated by the menial tasks given to him.

The only bright spots are his friendships with another politico, Russell (Derek Luke), and, even better, with April (Isla Fisher), who is doing part-time work in the campaign office. She is a perky young lady who is apolitical but open to a non-sexual relationship with Will. Then he meets Summer (Rachel Weisz), a stunningly attractive aspiring journalist who is having a romantic fling with Hampton Roth (Kevin Kline), her alcoholic and middle-age thesis advisor who is a nationally known political analyst. She was once a classmate of Emily's.

Definitely, Maybe was written and directed by Adam Brooks who wrote the screenplay for Wimbleton. We all have our own stories about our quests for love and while watching this appealing drama, you will probably have some of those old feelings come to the surface. Will reminds us that for love to bloom properly, couples need to be on the same page and not be in different places. Poor timing can bring unhappiness and disappointment.

Illustrating another common problem among those seeking a lasting intimate relationship, Will sometimes has a hard time distinguishing between liking a woman and loving a woman. Margaret Anderson has commented: "In real love you want the other person's good. In romantic love you want the other person." It takes Will a long time to learn this spiritual insight, and the one who helps him open his heart is his daughter. By the way, Abigail Breslin who was so amazing in Little Miss Sunshine is equally astonishing in Definitely, Maybe.

Special features on the DVD include deleted scenes; Creating A Romance - brought to you by Volkswagen; The Changing Times of Definitely, Maybe; feature commentary with director Adam Brooks and star Ryan Reynolds. 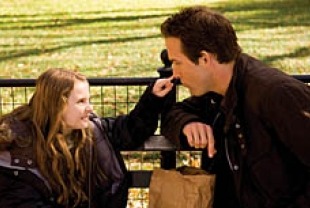 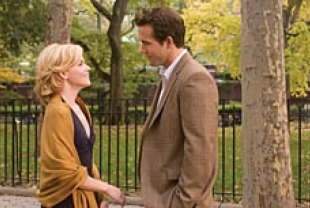 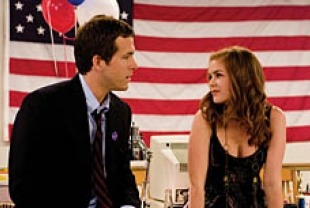 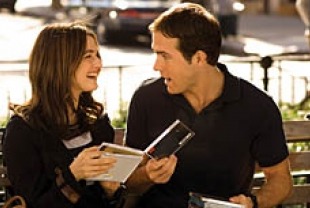