Directed by Ramin Bahrani
A poignant and heart-affecting film about a 12-year-old Latino street orphan who is one of the many poor in the forgotten America.

In his first film, Man Push Cart, Iranian director Ramin Bahrani focused on a poor Pakistani immigrant trying to keep his soul alive on the streets of New York City selling coffee, doughnuts, and bagels from a push cart. One challenge after another knocks him down, not to mention the thousands of little humiliations and indignities which come his way from customers. In Chop Shop, Bahranai depicts the resiliency of a 12-year-old Latino street orphan who works in an auto-body repair shop in the outskirts of Queens, New York. It is another extraordinary film about the terrible things poverty can do to those who, like the rest of us, have dreams they yearn to see fulfilled.

Alejandro (Alejandro Polanco) works in one of the many auto repair places in an area called Willet's Point or the "Iron Triangle." It is a full-blown slum filled with other auto shops, scrap yards, and garbage dumps. He expends a lot of energy every day lugging things around and trying to convince customers to come to his shop rather than the others. It is not an easy job for a young boy.

Alejandro's boss allows him to stay in a small room in the back of the auto shop. The boy is very excited when his older sister, Isamar (Isamar Gonzales), arrives to stay with him. He has gotten her a job in a food van selling meals to workers in the Iron Triangle.

Alejandro keeps going because he has a dream. He wants to purchase a mobile food van so that he and his sister can support themselves. To get the necessary money, he has to hustle on the side. Alejandro sells candy on the subways and bootleg DVDs wherever he can. He also steals hubcaps off of cars parked nearby at Shea Stadium and one time even takes a woman's purse. He is relentless in his efforts to make his dream come true. When he finds out that his sister is doing some sex work on her own, he gets very angry.

Director Bahrani and co-writer Bahareh Azimi present a searing view of the bottom of the working world, a place of unrelenting bleakness and pressure. Being poor in a rich country is a challenge that demands all the energy, creativity, and determination of these representatives of the forgotten America. There is no easy exit from poverty for Alejandro, who doesn't attend school or know how to read. He lives in a slum filled with pollution from cars and toxic sprays used in the auto repair shops. For now he has a place to sleep, but he knows he is one small step away from homelessness. He is exploited by his employer but has no other choices. In the opening scene of the film, we see Alejandro rejected as a day laborer since he can't as a child compete with men.

Ramin Bahrani has our gratitude for giving us two astonishingly realistic and poignant films about the invisible poor in America. Once we can see their faces and the challenges of their lives, we can begin to empathize with them. And once we can feel empathy, we can be compassionate. And compassion leads not to pity but to determination to do something about the moral imperative to help our neighbors. We hope more directors will take the time and make the commitment to spiritual cinema like Chop Shop. 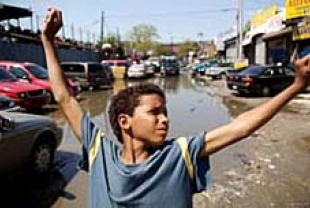 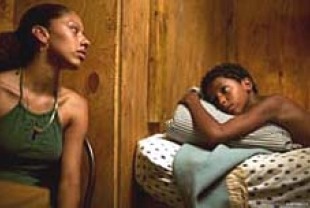