Directed by Terry Sanders
A salute to the courageous and caring work done by military doctors and nurses in Iraq, Germany, and the United States.

More than 25 % of active duty military physicians were trained at Uniformed Services University in Bethseda, Maryland. This engaging documentary by two-time Academy Award-winning filmmaker Terry Sanders presents the skill, dedication, courage, and compassion of the doctors and nurses who have graduated from this school that has been called the "West Point" of military medicine. Many of them are now serving in Iraq and Germany where they take care of the American soldiers and Iraqi civilians wounded in Iraq and Afghanistan.

Treating multiple blast injuries, head traumas, and loss of limbs are daily occurrences for these medical professionals. As one of them says, "There's nothing normal about war. There's nothing normal about losing a limb or seeing our best friend die." In a very emotional sequence, a wounded soldier is told that he will never walk again. Another soldier recuperating in America recalls the 18 operations on his body. Army Specialist Crystal Davis, who lost part of one leg and has to undergo intensive physical therapy for her other foot, refuses to give in to despair and depression.

In treating all these people, the doctors and nurses in the film come across as angels dispensing their own brand of miracles. They realize that many of the young men and women injured in combat will require treatment for the rest of their lives. The filmmakers of Fighting for Life had unprecedented access to combat support hospitals in Iraq, Medevac flights with wounded soldiers, and military hospitals in Germany and the United States. This enabled them to create an authentic and inspiring portrait of the life-affirming work of these doctors and nurses and the remarkable courage of their patients. 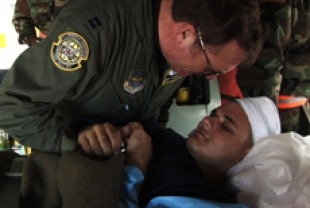 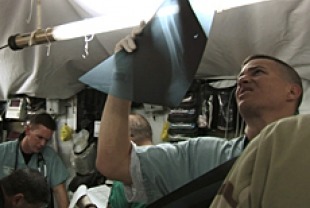 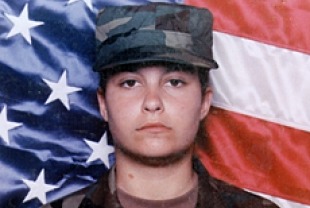