Directed by Brillante Mendoza
A gritty look at the nurturing love of a foster mother in a Manila slum for a three-year-old boy.

There are too many people on the planet, and the numbers are expanding every day, especially in poverty-stricken large cities. Large numbers of infants are abandoned. The lucky ones are taken in by orphanages and given to foster mothers who care for them until they can be adopted. Women with the God-given gift for nurturing can work wonders with these kids, doing a small but important part in mending the world with love. Brillante Mendoza's touching film profiles one of these women.

Thelma (Cherry Pie Picache) lives with her husband (Dan Alvaro) and two sons in a slum in Manila. In the living room are pictures of the many children she has taken in and cared for while winning multiple Foster Mother of the Year plaques. She was assigned to tend John John (Kier Alonzo) when he was just two months old and fit in a shoe box. He was an abandoned baby. Thelma is very close to him and attentive to all his moods given that he has asthma. Now he is three years old and ready to be handed over to an American couple from San Francisco who are going to adopt him.

Thelma takes John John to a preschool pageant where he wins a prize, and then they're off to the foster care agency where Bianca (Eugene Domingo), a social worker, shows her the twins who will be her next charge. The usually calm Thelma is thrown off course when she steps into a luxurious hotel downtown. She feels totally out of place. Nonetheless, she tries to make a good impression on the Americans by showing a homemade book she has put together on John John's life. When the little boy pees on his new dad's lap, Thelma rushes to the fancy bathroom but can't figure out the shower and winds up getting both herself and John John drenched.

This film is a moving look into one part of the adoption process that is rarely acknowledged — the emotional toll on the child care workers and foster care parents who take in the little ones, only to have to let them go. 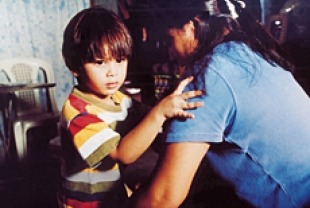