Directed by Stephen Walker
An extraordinary documentary about a senior citizen chorus that reveals singing as a spiritual practice.

"Even if you can't sing well, sing. Sing to yourself. Sing in the privacy of your own home. But sing," Rebbe Nachman once noted. This sage advice from a Hasidic spiritual leader has been echoed by many others. Singing opens our hearts, provides fresh energy, lifts the spirit, connects us with others, exercises our brains, and keeps us in tune with the beat of the universe. This documentary reveals how that's true for the members of the Young@Heart Chorus, a New England senior citizens chorus.

In this extraordinary documentary, Stephen Walker spends seven weeks with the 24 seniors and the chorus's director Bob Cilman. These retirees, many of them in their seventies and eighties, love to sing and to bring pleasure to others. Although quite a few of them say they like classical music and opera the best, the songs in their repertoire are rock, punk, and R & B classics.

In the opening scenes, Cilman announces that he has seven new songs for them to learn before their next concert in their hometown of Northhampton, Massachusetts, in just seven weeks; they are then scheduled to go on a European tour. He is a rigorous taskmaster who is not afraid to push the chorus to try very new things. But the members of Young @ Heart are ready, willing, and able to tackle this new challenge, and they faithfully attend many long rehearsals going over the intricacies of these difficult songs.

Stan says confidently, "I'm trying to expand my horizons." It is a sentiment shared by many of the others. One of the many stereotypes about older people is that they are resistant to change and set in their ways. Not so these singers who struggle to wrap their brains around the complicated music of Sonic Youth's dissonant rock anthem "Schizophrenia" and the tongue-twisting lyrics in Allen Toussaint's "Yes We Can Can."

There are many colorful characters in Young@Heart and the filmmaker spends some quality time with a number of them. One of the spunkiest is 92-year-old Eileen Hall who begins the documentary with an endearing solo of The Clash's "Should I Stay or Should I Go?" Another is Fred Knittle, a talented singer and former member of the chorus who was sidelined for a while due to congestive heart failure. He is featured in a full-length music video in the documentary where he performs "Stayin Alive." During the final concert he also sings a moving rendition of Coldplay's "Fix You" in tribute to Bob Salvini, with whom he had been scheduled to perform a duet; Bob died just before the concert after a long bout with spinal meningitis. Two other musical videos are featured and they are both delightful: The Ramones' punk rocker "I Wanna Be Sedated" and David Bowie's "Golden Years."

It is very touching watching the members of the chorus respond to the sudden death of Joe Benoit, who had survived six bouts of chemotherapy. He was an enthusiastic singer and an upbeat solo performer. One of the most magical moments of the movie is when Young@Heart perform Bob Dylan's "Forever Young" at a local prison. The faces in the audience reveal a range of emotions as they listen to the song and then rise to their feet in thunderous applause.

Here is a documentary that changes our perceptions of long-lived individuals and makes it clear that singing is a life-affirming, community-building, and very nurturing spiritual practice. 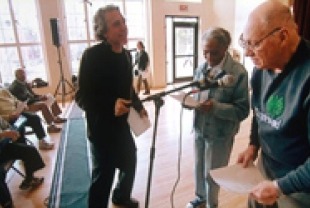 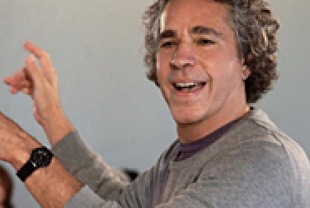 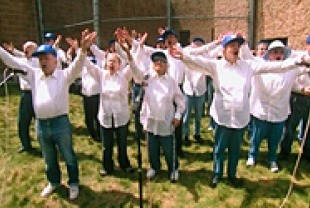 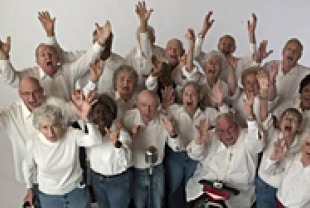