Directed by Jon Favreau
A superhero flick with the message that an arms dealer can see the light and give up the business of making a profit on the death of others.

Tony Stark (Robert Downey Jr.) is a brilliant very rich man who has made his fortune from selling weapons. He's the main inventor and director of an arms company started by his father. A selfish man, he spends most of his time seeking pleasure in his Malibu home overlooking the ocean. A journalist calls him a "merchant of death" but the criticism doesn't bother him at all.

While in Afghanistan to demonstrate his latest smart missile, Stark is captured and tortured by a band of terrorists whose leader, Raza (Faran Tahir), wants him to rebuild the smart missile for him. Instead, the sneaky arms dealer creates a high-tech armor suit that enables him to wreck havoc on his enemies and to escape into the desert where he is rescued by American soldiers.

Back home, Stark shocks Obadiah Stane (Jeff Bridges), the chief executive of the company, and dismays Rhody (Terrence Howard), his military liaison, by announcing that he has had a change of heart and is giving up the arms business and dedicating himself to something worthwhile. The company's stock plummets, and people begin to wonder if he's gone nuts. Even his lovely and loyal assistant Pepper Potts (Gwyneth Paltrow) is uneasy about all the changes in her boss, especially when Stark builds a new and improved red and gold armor suit. His plan is to use the suit to stop the terrorists who have gotten hold of so many of the Stark company weapons. In doing so, he discovers he has enemies in many corners.

Jon Favreau directs this action drama based on a Marvel superhero series. The only thing that makes it watchable are the performances of Downey, Paltrow, and Bridges; they bring real presence to their characters and make you care about what happens to them. Considering that the U.S. remains the number one arms dealer in the world, it's pleasing to see one person give up the business of making a profit on the death of others. It would be even nicer to see a superhero who is a nonviolent pacifist creatively spreading peace. 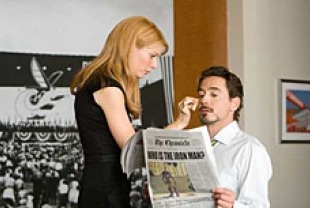 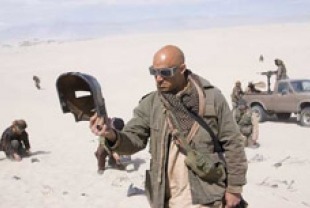 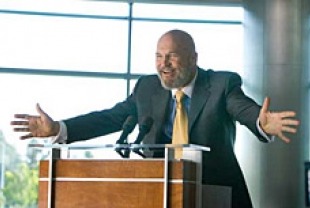 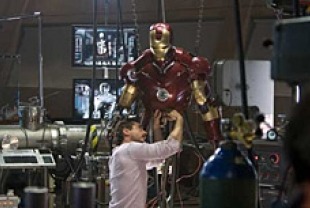 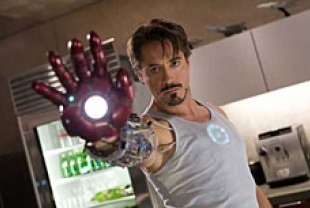