Directed by James Marsh
A compelling documentary about a man's sensational walk on a wire between the Word Trade Center Twin Towers in 1974.

From an early age, Philippe Petit was a wire walker with a love for the beauty of the performance and the danger of it. To him, it was sort of like flirting with death. He recalls reading an article about the Twin Towers of New York's World Trade Center, then the world's tallest buildings, and being obsessed with crossing from the top of one tower to the other. Petit enlists the help of his girlfriend, Annie Allix, and friends Jean-Louis Blondeau and Jean-Francois Heckel, as he begins planning the complex details of gaining illegal access to the buildings and rehearsals to deal with the winds on the wire.

This fascinating documentary about Petit's walk on a high wire between the Twin Towers in 1974 is skillfully directed by James Marsh. He uses candid interviews, re-enactments, and archival footage to capture the drama of this wire-walker's amazing feat. There are photographs and images of Petit's walks across the towers of Notre Dame in Paris and the Sydney Harbour Bridge towers in Australia. As the great artist Rainer Maria Rilke once observed:

"Works of art always spring from those who have faced danger, gone to the very end of an experience, to the point beyond which no human being can go. The further one dares to go, the more decent, the more personal, the more unique life becomes."

Watching Petit and his friends set up the wires and then seeing him walk between the Twin Towers is to be a witness to a dream come true. There is a beauty in his balance and focused attention that is awesome. He is atop the world for 45 minutes, and one eyewitness states: "It was like he was walking on a cloud." Petit's daring act garners global publicity, but he makes several personal missteps back on earth which have a dire effect on his girlfriend and his best friend. Sometimes facing danger and flirting with death can lead to something less than the decency that Rilke talks about. The complex and subtle handling of Petit's story is what makes Man on Wire such a compelling documentary. 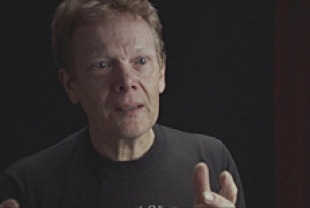 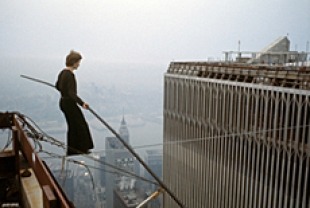