Directed by Kelly Reichardt
A compassionate account of an enterprising young woman on her way to Alaska to find work who falls into peril.

Hundreds of thousands of men and women in America are just a step away from dire poverty and homelessness. Often their stories do not get told. This is one of them.

With only a limited amount of cash, Wendy (Michelle Williams) sets off in an old car from a stay with her sister in Indiana. She's driving to Alaska for a job at a cannery. Wendy is convinced that a fresh future awaits her in a state where people believe in rugged individualism and the American Dream. Wendy's only companion on her journey is her beloved dog Lucy. In a small mill town in Oregon, she runs into trouble.

After sleeping in her car all night, Wendy is awakened by a security guard (Walter Dalton) who tells her to move her car since it is on private property. Only trouble is, the engine won't start and so they must push it to another spot. Wendy washes up in a bathroom and goes to a supermarket to get some dog food. She is caught shoplifting by a zealous clerk (John Robinson) who wears a large gold cross around his neck. He convinces his boss that the rules must be followed, and Wendy is taken to the police station. Meanwhile Lucy is left behind on a leash in front of the supermarket. After spending many hours in jail and paying a fine, Wendy hurries back to the store only to find that Lucy is no longer there.

Kelly Reichardt directs Wendy and Lucy, a character-driven drama that has the same laser-sharp focus and gritty realism as her last film, Old Joy, which we declared one of the Most Spiritually Literate Films of 2007. There she probed the death of a friendship and the loneliness of a young man whose life is on the verge of a collapse. She co-wrote Wendy and Lucy with Jon Raymond, and it touches the heart with the sorrow and guilt Wendy feels while searching the mill town for her dog. Unable to do anything until her car is fixed, she takes it to a garage run by a straight-talking mechanic (Will Patton). She has quite a scare one night while sleeping in the woods when she wakes up and sees a bedraggled homeless man (Larry Fessenden) watching her. Assaulted emotionally by fear, loneliness, and frustration, Wendy calls her sister but gets no sympathy from her. This forces her to rely almost totally on the kindness of the security guard who lets her use his cell phone and comes up with several helpful suggestions for finding Lucy.

The bond of love between Wendy and Lucy forms the spine of the story and we keenly feel the pain of their separation from each other. In one of the most poignant scenes, Wendy is ushered into the area in the dog pound where the stray animals are kept. She looks into each cage yearning for Lucy. Most of the dogs have probably been abandoned by their owners.

Without a social network to love and look after her, Wendy is at the mercy of circumstances, and she can only rely on her will to survive. Her story touches the heart because there are so many people around the world just like her. 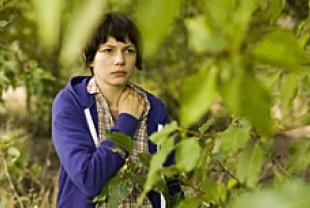 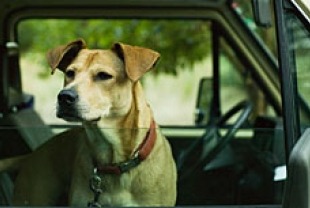