This visually stunning drama is set in the vast empty spaces of southern Kazakhstan's Hunger Steppe. Asa (Askat Kuchinchirekov ) lives in a yurt with his sister, her husband Ondas, and their three children. A daughter wanders around singing all the time; her brother has a facility for memorizing news broadcasts; and the little one shrieks with pleasure as he play with some sticks and a pet turtle.

Ondas is convinced that Asa, whom he views as irresponsible, cannot make it in the steppe unless he gets married. The young man regales an older couple whose daughter Tulpan is eligible with stories of his adventures while in the military service at sea. But the young woman, who hides behind a curtain, rejects him because "his ears are too big." Asa is heartbroken since he has drawn a picture of his future on his navy uniform: in it, he lives with his wife and tends a large herd of animals. Meanwhile, he tries to prove himself to Ondas whose herd of sheep is plagued by a series of mysterious deaths of the lambs.

Tulpan is directed by Sergey Dvortsevoy, and it is a pleasure to watch. We get a real sense of this barren land where the sun bears down on those trying to make a living there. Wind storms cover everything with sand. The tale depicts Asa's coming-of-age as he helps a weak sheep give birth to a lamb struggling for breath. He has to breath into the baby's mouth to help it survive.

Asa is pulled to the allures of the city by a crazy friend who drives a food supply truck and loves the reggae song "By the Waters of Babylon." He wants Asa to escape the hardscrabble life on the steppe. The director has a fine sense of humor which is conveyed in several scenes, including one where a veterinarian shows up to examine the sheep and complains about the braying of a sick baby camel in the sidecar of his motorbike and its mother who is upset about her offspring's plight. These moments and others involving Asa's campaign to get Tulpan to marry him are worth savoring.

Special features on the DVD include an interview with director Sergey Dvortsevoy, from Cinema Scope magazine. 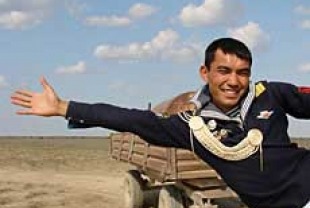 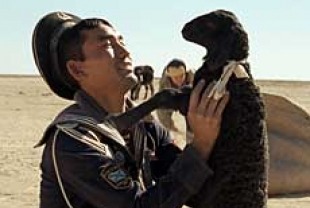