Allah Made Me Funny: Live in Concert

To be Muslim in America today means to live under the angry clouds of prejudice and hatred. One way to break through to the other side is to use humor. Allah Made Me Funny: Live in Concert features three comedians — an African American, an Arab American, and a South Asian who reveal the diversity of Islam in contemporary America. In separate comedy routines, they bring out the humor in how they see themselves, the communities where they live, pop culture, the government, and the complications of being Muslim in post 9/11 America. Of course, there are the staple jokes about family, marriage, and sex.

Mo Amer makes the most of his Palestinian background in a very funny bit on checkpoints. Azar Usman ponders his American-Muslim childhood. And Preacher Moss uses his experiences of being black and Muslim in America as a vantage point for clever asides on race and religion. In the press notes, Moss states the purpose of this concert: "This project involves the courage to step out of the shadows of silence and fear and reach out and build bridges. We're building these bridges through humor and understanding to make that journey a little easier for all of us."

The writer, director and producer of Allah Made Me Funny: A Live Concert is Andrea Kalin who intersperses the comedy routines with bits about comedians's family lives and their preparations for the show. Michael Wolfe is the executive producer of the film and author of books on Islam including The Hadj: An American's Pilgrimage to Mecca. 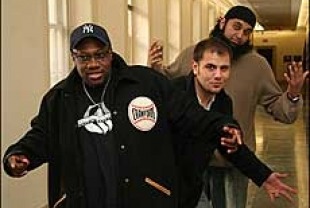