Directed by David Lynch
An inspiring movie about a man's deep spiritual yearning to reconcile with his brother.

Marvels abound in this simple yet emotionally rich drama, making it one of the best films of 1999. I was born and raised in the Midwest, so it is with great pleasure that I salute David Lynch for doing what no other film director in the past decade has been able or willing to do — create an honest and engaging drama about real people from the heartland of America.

Let's also put our hands together for Lynch's unusual choice for his protagonist — a 73-year-old man. And continuing our applause, let's admit how great it is to see a story whose rhythm and tempo perfectly match the slow beauty of rural life, where some people still take time to savor a sky full of stars or to watch a thunder-and-lightning storm.

Alvin Straight (Richard Farnsworth) has two bad hips, congested lungs, and poor eyesight. He lives in Laurens, Iowa, with his middle-aged daughter Rose (Sissy Spacek), who is a little "slow" mentally. When Alvin hears that his brother Lyle (Harry Dean Stanton) has suffered a stroke, he decides to go visit him. "There's no one who knows your life better than a brother that's near your age," he says. "He knows who you are and what you are better than anyone on Earth." Alvin has been estranged from Lyle for ten years, and he believes it is time to swallow his pride and reach out to him.

But this won't be easy. Alvin doesn't have a driver's license anymore, and he doesn't like to accept help from others. He decides to make this pilgrimage on a 1966 John Deere riding lawnmower pulling a trailer with his supplies and room for him to sleep at night. It's a long journey at about five miles an hour across Iowa and the Mississippi River to Mt. Zion, Wisconsin. Along the way he meets a group of bicycle racers, a pregnant teenage runaway, a hysterical woman who has killed a deer crossing the road, a fellow World War II veteran, and some kindhearted citizens of a small town who offer him shelter and food when his lawnmower breaks down and has to be repaired.

The wistful screenplay by John Roach and Mary Sweeney is based on the real Alvin Straight's journey in 1994. This elder wears his stubbornness as a badge of honor, a true indication of his feisty individualism. He has a special place in his heart for Rose, who was unjustly accused of not being a good mother and was forced to give up her four children to the state. His reminiscences about a terrible incident that happened during World War II and its dire effects on his life are truly devastating. Nonetheless, Alvin's deep spiritual yearning to reconcile with his brother gives him the energy and strength he needs to fulfill his mission.

The Straight Story is another example of David Lynch's incredible ability to connect us with the extraordinary as he did in The Elephant Man, Blue Velvet, and Lost Highway. Only here what happens is not weird but wonderfully human. This film also offers a rich sauna for the senses with the crisp and beautiful photography by Freddie Francis and the lyrical bluegrass music by composer Angelo Badalamenti. 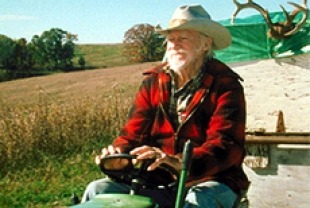