Buddy is a very talented Golden Retriever who is part of an act called The Clown and the Hound which does children's birthday parties. Norm Snively (Michael Jeter), the clown in the act, gets angry at the dog and decides to take him to the local pound. But on the way, Buddy's crate falls off the truck and he runs away.

Josh Framm (Kevin Zegers) has just moved to town with his widowed mother (Wendy Makkena). He is a lonely boy who misses his dad, a test pilot who was killed in a crash. One day he discovers an abandoned basketball behind an old church and in the bushes nearby, Buddy. He immediately takes to the dog, especially when he discovers that he can pass a ball by hitting it with his nose and even score baskets. Josh convinces his mother to let him keep Buddy in the back yard.

At school, Josh is treated poorly by the other kids who see him as an outsider. Instead of letting him try out for the basketball team, the coach makes him the manager, doing odd jobs during the practices. Josh discovers that Arthur Chaney (Bill Cobbs), the school's janitor, used to be a famous player for the Knicks years ago. Much to his delight, this African-American becomes coach of the basketball team. Thanks to a special talent that Buddy has on the court, Josh gets his chance to play with the team and fulfill his dream.

Charles Martin Smith (who starred in the classic animal advocacy film Never Cry Wolf, directs this drama which gives plenty of attention to the extraordinary gifts of Buddy as a canine athlete. Although the story is predictable every step of the way, Zegers and Cobbs as the two outsiders are so appealing that we set this flaw aside and enjoy the theatricality of the basketball games where Buddy gets his chance to show his stuff.

Special DVD features include the original theatrical trailer along with a special "Dog-U-Commentary" by "The Buddies" (golden retriever puppies). 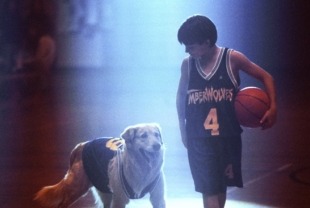