The American public is presently fed up with greedy and unethical CEOs and corporate wheeler dealers who are willing to use every trick in the book to advance their own power, wealth, and prestige. That is why this combination love story and drama about corporate malfeasance may really percolate at the box office.

Howard Tully (Tom Wilkinson) is the power-hungry head of Burkett & Randle, a multinational corporation that has grandiose plans for the future. Dick Garsik (Paul Giamatti) is the CEO of Omnikrom, a fierce competitor. When he hears of a new product which will rock the world and produce immense profits, he sets his corporate spying unit into motion at full speed.

Former M16 agent Ray Koval (Clive Owen) and former CIA officer Claire Stenwick (Julia Roberts) have decided to ditch their jobs in government intelligence for the more lucrative field of corporate counter-intelligence. They meet in Dubai and the sparks fly, even though Ray believes Claire betrayed him. Each time they meet, the sexual electricity between them is heightened, along with their inability to trust each other. They decide to infiltrate both Burkett & Randle and Omninkrom so they can capitalize on their schemes and come up with their own scam. Ray and Claire really get excited when they learn of Tully's big product and its major impact on global sales. They decide to steal the formula for the product and sell it to the highest bidder.

Tony Gilroy (Michael Clayton) has written and directed this fascinating drama which zips around to fancy locations including Rome, London, the Bahamas, Miami, New York, and Zurich. The screen chemistry between Clive Owen and Julia Roberts sizzles along with their clever repartee. She is a control freak, and he is a hedonist who can't resist a pretty lady. And Tom Wilkinson and Paul Giamatti are top-notch as the two egocentric, amoral, and greedy CEOs who are only out for their own glory. They are dangerous men willing to do anything to achieve their cause. 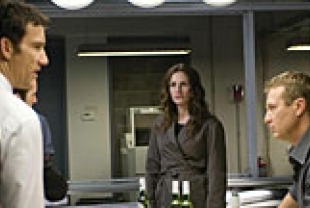 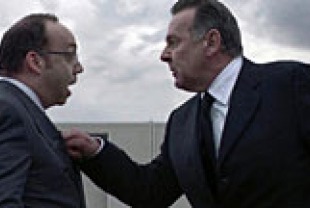 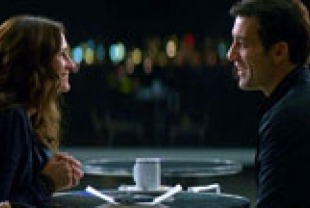