Directed by Cherien Dabis
The uplifting story of a resilient Palestinian mother and her son struggling to make a new life in America.

Muna (Nisreen Faour) is a Palestinian single mother raising her 16-year-old son Fadi (Melkar Muallem) in the West Bank. She lives with her feisty mother who has a talent for singing; her brother is also nearby. They all endure the humiliations and frustrations of the process of the Israeli checkpoints when going to Jerusalem.

One day Muna learns that she's received a Green Card. Although wondering whether she is up to this new adventure, Fadi convinces her that it necessary for them to go so he can have access to a university education. They arrive at the Chicago airport and are stopped by custom agents who rummage through their luggage. Muna has hidden her savings of $2,500 in a cookie tin. While she is distracted, her son hands the tin over and the agents decide to confiscate it. Muna doesn't realize what has happened until they arrive at her sister's house in a suburban community.

Raghda (Hiam Abbass) is married to a doctor, and they have three children. The war in Iraq has just started, and all Arabs in America are viewed as possible enemies or terrorists. As a result, the doctor is rapidly losing patients and the family is facing financial worries. Of course, their problems are minor in comparison with Muna's. She immediately starts looking for employment in a bank since she has had years of experience in management. But there are no positions open. Secretly, she takes a job working at a White Castle joint where one of her co-workers is a high school drop-out with blue hair.

At high school, Fadi is shown the ropes by his politically radical cousin Salma (Alia Shawkat). She is not pleased with being seen as an outsider in the community and bristles at the white students' ignorance about Arabs and Muslims. Soon Fadi is nicknamed "Osama" and singled out for ridicule. A serious student who loves to draw, he is unprepared for feeling as much like a prisoner in America as he did on the West Bank. When Fadi gets into trouble at school, Muna meets with the principal (Joseph Ziegler) who is impressed by the love she has for her son and her high spirits. Later, he proves himself to be an ally just when they need help. It turns out that he's a Polish Jew who knows what it is like to be starting all over again.

Amreeka (America in Arabic) marks the feature film debut of director Cherien Dabis. This warmly human and totally engaging dramedy is filled with many wonderful scenes of human connection and meaning. For example, in one, Muna explains to the principal that the Arabs invented chess and in another magic moment, she treats her co-worker at White Castle to the delights of a falafel burger. A third is a speech given by her sister about the loneliness and disconnection that immigrants can feel as a result of homesickness. But the overall uplift of the story lies in the multileveled performance of Nisreen Faour whose resilience and grace under pressure enable her to triumph over the various setbacks and obstacles which come her way. Hope is the tonic that keeps her going, and you will find yourself cheering her on every step of the way. 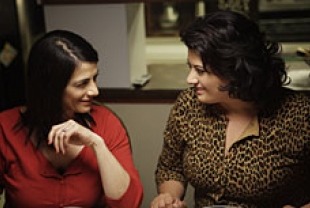