Directed by Vladimir Kott
A Russian film about a selfish trucker and his rebellious teenage daughter who try to become a family after years apart from each other.

Fyodor (Alexey Kravchenko) is a truck driver who relishes his single and independent lifestyle. A handsome man, he's very attractive to women of all types and stations in life. He can't even remember all the women he has been with over the years. That is why Fyodor is baffled when he receives a letter from one of his conquests informing him that he has a daughter. He drives to a small rural village in Russia and meets Mukha (Alexandra Tuftey), a 16-year-old rebel who has gotten in trouble by burning down the mayor's house. Fyodor is miffed to discover that as her father he is liable for the damages.

Mukha is a tough cookie whose favorite sport is boxing. She is ridiculed by the boys at school who do not know how to respond to her rebelliousness. When a nerdy classmate is shunned by everyone after blowing a gladiatorial fight, it is Mukha who takes him under her wings.

But she is less tolerant of her father whom she views as an intruder. When the mayor's goons pressure him to pay the money he owes, he takes a humiliating job as a sanitary engineer sucking out septic tanks. Like his daughter, Fyodor has a tender side: this comes through in the supportive role he takes with an army mother who is shattered by the lack of mail from her son. He also has sex with a math teacher at the school who works nights as a bartender. Her way of thanking Fyodor is to get him a job at the school as a physical education teacher. This irks Mukha who grows even more angry when she hears all the females in the class taking about how sexy the new gym teacher is.

Mukha is a Russian film directed by Vladimir Kott probing the meaning of family to this rambunctious teenage girl and her irresponsible father. Underneath their tough exteriors, each is lonely and seeking something that offers shelter from the storms and surprises of life. It is obvious from Fyodor's tenderness with the army mother and Mukha's compassion for the nerd that these two are capable of listening to their hearts rather than to their selfish impulses. The finale is predictable but there are many treats in store for those who take this sentimental journey into reconstituting a family. 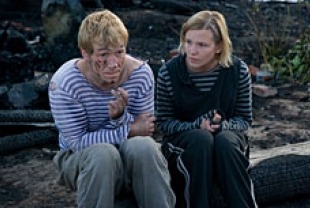