Directed by Marco Bechis
A convincing portrayal of the plight of the Guarani Indians of Brazil as they struggle to survive amidst poverty and displacement from their forest home.

As a band of tourists glide by on a boat in a Brazilian river looking for exotic birds, they are startled to see a band of half-naked Guarani Indians with bows and arrows in their hands aimed at them. Later, these tribal men and women don Western clothing, are paid by the expedition guide, and head off in a truck back to the government mandated reservation. It is one of the humiliating ways — another is cutting sugar cane — that they can earn money.

Following the suicides by hanging of two more members of the Indos, headman Nadio makes a bold decision to leave the reservation and return to their tribal homeland (tekoha) which happens to lie on the property of Medeiros, a wealthy landowner whose family has owned the land for 60 years. Of course, from Nadio's perspective his people have occupied the same land for thousands of years.

In his fourth film, Italo-Argentinean director Marco Bechis has made a thought-provoking social drama that features Guarani Indians in lead roles. This tribe was previously featured in the films The Mission and in Fitzcarraldo. The drama reveals the daunting challenges faced by indigenous peoples in Brazil: poverty, the end of hunting, suicides, alcoholism, and the younger generation's lack of interest in ritual and religion.

In a subplot, Osvaldo, a young man who has dreams in which he can see the future, is chosen to become a shaman in training. But his dedication to tradition is negated by his fascination with the sexually loose behavior of Maria, the daughter of the landowner, and the death of his best friend, the son of Nadio who was cursed by his father for purchasing shoes with his food money.

Birdwatchers effectively conveys the plight of the Guarani Indians who thrived in the forests of Brazil for centuries and refused to enter Jesuit missions. They have their own distinctive religion and believe that the invasion of their land by Europeans is not only theft but a serious attack on their very identity. 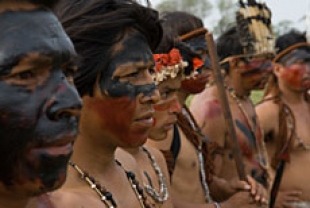