Directed by Gianni Di Gregorio
A thoroughly delightful Italian film about a nurturing man who finds his caregiving responsibilities greatly expanded during a summer holiday.

Gianni (Gianni Di Gregorio) is a sixty-something man who lives with his 93-year-old widowed mother (Valeria De Franciscis) in central Rome. In the opening scene, he is reading to her, and they are wrapped in a cocoon of mutual pleasure and ease with one another. Gianni cooks, cleans, shops, and takes care of her medicine. It is almost a full-time job but he seems accustomed to the rhythms of a ritualized life with her.

The day before an August bank holiday, the condominium manager arrives with bad news about the money Gianni owes. He has a suggestion: he will knock off some of the debt if Gianni will look after his mother for the next two days. But when the manager comes back, he also brings his aunt who has no place to stay. To make matters more complicated, Gianni's doctor gives him a check-up and then asks if his mother can stay one day since he has to work a shift at the hospital.

Suddenly this veteran caregiver feels overwhelmed. But he decides to take things in stride, putting the women in separate rooms and going shopping for food. The manager's mother wants to watch television, and Gianni takes it away from his mother to keep the guest satisfied. He wins everyone's approval with a fine meal but the next day, the manager's aunt makes a macaroni dish that is devoured by the doctor's mother who isn't supposed to eat that kind of food given her stomach troubles. Gianni also must watch over his mother and what he calls her "snippy" behavior.

Mid-August Lunch is a delightful Italian film that provides a balanced and loving look at a nurturing male and the kindness he lavishes upon his three elderly guests and his mother. Gianni has his failings: his alcoholism is revealed, and he obviously has trouble handing family financial affairs. The director Gianni Di Gregorio does a fine job playing Gianni, and he draws out nicely delivered performances from the women — all non-professional actors — Valeria De Franciscis, Marina Cacciotti, Maria Cali, and Grazia Cesarini Sforza.

Special features include an interview with director/star Gianni Di Gregorio; a visit with the cast: Di Gregorio travels to Rome to catch up with the actresses; and a booklet featuring recipes of dishes from the film. 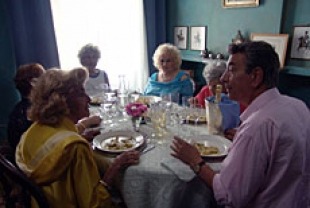