Directed by Enrique Rivero
A quiet portrayal of the pleasures of solitude that come with being the dedicated caretaker of a luxurious house in Mexico City.

Beto (Nolberto Coria) is a dedicated and disciplined custodian of a large and luxurious house in Mexico City. He has been looking after the empty place for the wealthy woman (Tesalia Huerta) who owns it for many years. There are many daily chores related to the cleaning and maintenance of the inner house and the grounds. Beto is a man who enjoys the solitude and the security of having a special place to live. He usually eats his dinner watching the TV news which is filled with an unending stream of reports on violence, suffering, death, and destruction. No wonder Beto has developed a fear of going out on the streets of the city. His only regular contacts are the owner, her driver who brings him newspapers, and Lupe (Nancy Orozco), a prostitute who comes to the house regularly.

Parque Via is directed by Enrique Rivero, and it quietly conveys the rhythms of Beto's secluded existence and the pleasure he derives from his routines. There is an unspoken connection between him and the owner of the house. When someone finally buys it, Beto has to quickly find work and a new home. His fate plays out in a surprising way. 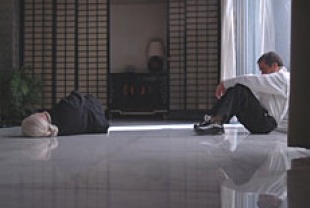