Directed by Scott Hamilton Kennedy
A compelling documentary about an urban garden collective and their spirited fight for justice.

South Central Farm is a 14-acre parcel of land in a poor section of Los Angeles. It was established in 1992 by the city as a means of doing something for the community after the riots following the Rodney King verdict led to $1 billion in damages. Doris Bloch, the founder says: "The neighborhood was quite blighted," so she came up with the idea "to make an urban garden out of it, because the people here are poor and they deserve to grow their own food: land, people, food — it's a pretty simple idea. Happy days." Most of those who took up the challenge were immigrants from Latin America who were very pleased with the chance to sow and harvest corn, eggplants, bananas, and papayas without using chemicals.

The 372 Latino families are shocked when an eviction notice arrives. Rufina Juarez, the leader of South Central Farmers Feeding Families, decides to fight the order. The back story is that in 1986 the city of Los Angeles paid developer Ralph Horowitz $5 million for this land to build an incinerator. Juanita Tate, a feisty African-American activist, organized a protest against the project and won. Then behind closed doors a deal was struck whereby the city of Los Angeles sold the property back to Horowitz for $5 million with the support of Tate and Councilwoman Jan Perry. The lawyers hired by the Latino collective smell something fishy in the proceedings of the past and begin a lengthy probe.

This poignant and involving documentary directed and produced by Scott Hamilton Kennedy reveals the corruption of city politics and the savaging of the poor, who are treated like children. The Garden has the same mix of drama and ethical depth as this gifted director's OT: Our Town which was also set in a poor area of Los Angeles.

After many court appearances, Juarez and her people are given the opportunity to purchase their urban garden back for $16 million. This motivates them to use the media to get the public behind them. Many celebrities support their cause including Danny Glover, Daryl Hannah, Joan Baez ,and others. Even Ohio Rep. and former presidential candidate Dennis Kucinich stands beside them. But racial prejudice against the Latinos surfaces during the long campaign to save their garden. Even worse are the political power plays and alliances that hobble their cause.

The Garden is a compelling documentary about an urban garden collective and their spirited fight for justice in a nation where poor people are expected to keep quiet and not to speak truth to power. 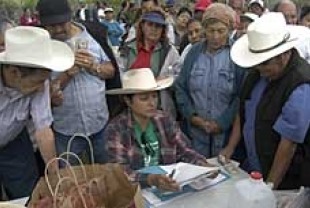 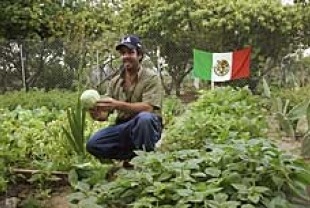 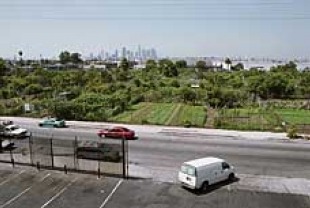