Directed by Kathryn Bigelow
A riveting Iraqi war film about three members of an Army bomb dismantling squad in Baghdad.

In this riveting film, director Kathryn Bigelow and screenplay writer Mark Boal focus our attention on the adrenaline-pumping tension of the work of members in the Army's Explosive Ordinance Disposal (EOD) elite corps. They volunteer and are trained to disarm bombs on the streets of Baghdad while civilians watch nervously from behind windows and standing on rooftops. Journalist Boal was embedded with a squad of these soldiers in Iraq four years ago and this may account for the authentic feel of the drama and its main characters.

In the chilling opening sequence, EOD team leader Sgt. Matt Thompson (Guy Pearce) examines a pile of trash and rubble after their robotic hardware usually used for this job goes on the blink. The bomb goes off before he can run far enough away from it and he is killed. Sgt. J. T. Sanborn (Anthony Mackie) is a tough intelligence officer who is a go-by-the-book soldier. Although his experiences have toughened him, he is counting the 38 days left on his assignment. Specialist Owen Eldridge (Brian Geraghty) is a young man who is very self-absorbed and obsessed with death. He is taking voluntary counseling and trying to come to terms with his demons.

These two members of the EOD team are taken aback when they witness the work of Thompson's replacement, Staff Sgt. William James (Jeremy Renner), a seemingly fearless wonder worker in dismantling complicated bombs. A colonel impressed by his skills calls him "a wild man" and commends him for his bravery. Sanborn is irritated by James's refusal to follow protocol and Eldridge's fears are tripled after the newcomer arrives.

In his bracing book War Is a Force That Gives Us Meaning, Chris Hedges admits to experiencing war as an adrenaline-pumping adventure: "The rush of battle is a potent and often lethal addiction, for war is a drug." He is quoted on the screen at the beginning of The Hurt Locker, which is a term used by EOD squads to describe the death-dealing force of explosions. There is no doubt that James is addicted to the thrill of handling homemade bombs and disarming them. When not on the job, he smokes furiously or listens to heavy metal music. Underneath his bed, he has a box of souvenirs of bomb parts from his past. But James surprises us with his compassion for an enterprising Iraqi boy, his encouragement of Eldridge who needs all the support he can get, and his attempts to forge a friendship with Sanborn, even though they view the world and the war in very different ways.

It is this attention to character development that makes The Hurt Locker an effective Iraq war drama that opens our eyes to another dimension of the soldiers stationed there. What is most troubling after leaving the theatre is trying to imagine what the future will hold for Sanborn and Eldridge after they return home and try to deal with everyday tasks in the mundane world.

Special features on the DVD include an audio commentary with director Kathryn Bigelow and writer Mark Boal; The Hurt Locker: Behind the Scenes; and an image gallery (with the option of playing the London Q&A in the background). 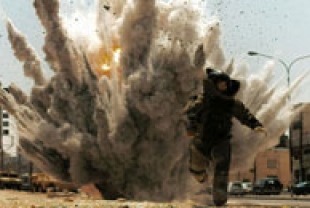 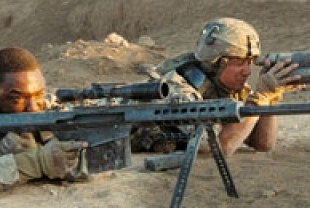 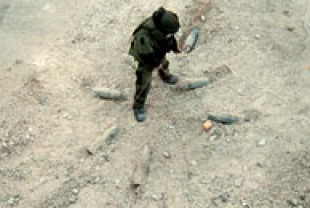 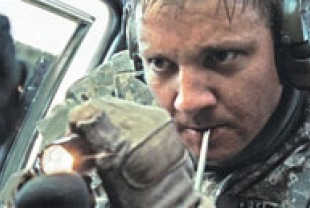