Ice Age: Dawn of the Dinosaurs

Directed by Carlos Saldanha
A lively and appealing 3-D animated feature about an extended family of animal friends who bond even closer to each other on a rousing adventure.

Welcome to the adventures of an extended family of animal friends who decide to go through some major changes together. Following in the spirit and comic tradition of Ice Age and Ice Age: The Meltdown, this family film is character-based and filled with positive images of love, respect, and courage.

Mammoths Manny (voiced by Ray Romano) and Ellie (Queen Latifah) are about to have a baby. Manny is very excited about becoming a father and has built a playground which he has baby-proofed by removing all the possible hazards. Diego (Denis Leary), a saber-toothed tiger who is Manny's best friend, realizes that he is the odd man out and decides it is time for him to leave the herd. Sid (John Leguizamo), the sloth, gets the blues when it hits him that he is lonely. While out feeling sorry for himself he falls through the ice into a cave and discovers three enormous eggs. Thinking they have been abandoned by their mother, Sid decides he'll raise them. Manny tells him this is not a good idea..

When the eggs hatch, Sid's nurturing instincts kick in at full force, but then their real mother, a gigantic T-Rex appears to claim the babies. Sid refuses to leave the kids and follows them back down under the ice to a strange green world. Ellie convinces Manny that they have to search for Sid. They are joined by two mischievous little possums and Diego, who hasn't gotten far from home.

This lightly humorous 3-D animated adventure is directed by Carlos Saldanha, and it takes the lead characters into an underground world of dinosaurs and other weird creatures. The little band of animal friends haven't got a clue how to find Sid but luckily they meet Buck (Simon Pegg), a sort of Crocodile Dundee character who is obsessed with Rudy, a huge dinosaur who took out his eye. Meanwhile, the male squirrel rat Scrat, a familiar figure from the previous films, has a new ally and competitor in the female Scratte.

This animated franchise fills the screen with lovable creatures who do together what they cannot accomplish apart. One for all and all for one was the motto for the Three Musketeers, and it could be the same for Manny and his extended family. By the time Ellie is ready to give to give birth, they are more bonded than ever. Sid and Diego discover that they have roles to fill, and the whole group has new hope.

Special features on the DVD include a commentary by the filmmaker and "Marley Meets Purina Puppy Chow." 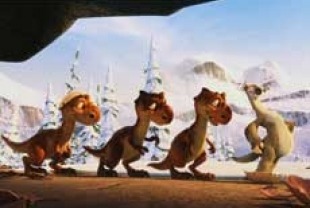 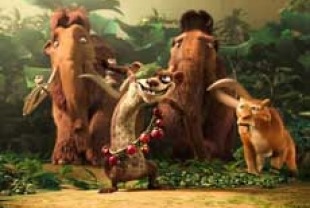 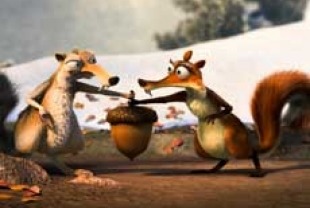