Everyone Else / Alle Anderen

Chris (Lars Eidinger), an architect, and Gitti (Birgit Minichmayr), a pop music publicist, have taken a vacation together at his parent's villa in Sardinia. She is totally and enthusiastically in love with him and expresses it in many different ways. He is much more reserved and finds it hard to even say the words "I love you." This seems to be a problem for many men who aren't emotionally literate. But this glitch in their romantic relationship doesn't stop them from having lively and creative sex.

Chris is anxiously waiting to hear about the results of a design competition he has entered. Gitti worries about her insecurities regarding her talent. Both of these characters have their own special moments of spontaneity and anarchy: Gitti teaches a niece how to express hate, and Chris does an improvised dance to the ballad "To All the Girls I've Loved Before."

Things take a turn for the worse when they bump into Hans (Hans-Jochen Wagner), a colleague that Chris has ridiculed for his obnoxiousness. He and his fashion-designer wife Sana (Nicole Marischka) invite them over for dinner. Gitti is dumbfounded when Chris accepts the invitation given the vehemence he has displayed about not liking this fellow. The get-together goes poorly, and Gitti gets into an argument with Hans. Perhaps to punish her for being so uncivil and such a nonconformist, Chris finds out about the results of the design competition but does not tell her. And on a hike together, they are clearly not on the same page.

In the most poignant scene in the film, the two couples meet again and Chris takes them through his parent's house. They wind up in his mother's private place, a sacred space with her music, art, and knickknacks. Chris puts on one of his mother's favorite songs and they make fun of its romantic excesses. Gitti sits there and realizes that she believes what the song is saying about love and she feels violated by her boyfriend's shoddy treatment of his mother's sanctuary. It is a telling moment which many couples reach at one point or another. Gitti knows in her heart that they will never be in the same place at the same time as lovers; even though they might stay together, their journeys will be separate.

Writer and director Maren Ade has made a cautionary romantic tale about the difficulties of intimacy in a world where men and women have such different and often contradictory attitudes toward love, commitment, stability, and nonconformity. Lars Eidinger does a fine job portraying Chris's laid-back nature and his self-absorption but the heart and soul of the drama is Birgit Minichmayr's colorful character who takes us on a rollercoaster ride of emotions as she tries to seal her love for Chris.

Special features on the DVD include "A Summer Without Gitti", a short film recut from the film material by Maren Ade; interviews with cast and crew; deleted scenes; outtakes; the theatrical trailer; and an essay by Mark Peranson, editor of Cinema Scope. 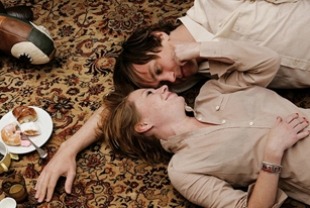