Directed by Matthew Robinson, Ricky Gervais
A romantic comedy that shows us a closer and deeper sensitivity to the sharp edges of honesty and the ways in which deceptions can both heal and harm.

The Invention of Lying is a rare achievement — a comedy that manages to deal with lying as one of the most pervasive and yet little discussed aspects of our private and public lives. In these times when duplicity is so rampant, it is a perfect occasion for us to become clearer about some of the faults and repercussions of truth-telling and the rigid rejection of all lies.

Ricky Gervais, the award-winning creator and star of the original BBC series The Office and HBO's Extras, along with co-director and writer Matthew Robinson, has fashioned a very funny and thought-provoking spiritual parable set in a world where lying does not exist and everyone speaks the truth with no anxiety about the consequences. Here judgment reigns over kindness as people express themselves freely by damning others as losers, condemning those who weigh too much, lauding those who get ahead no matter how cruel or selfish they are, and easily telling someone that they despise them. One of the epiphanies in the movie for us was the realization that honesty can be used as a bludgeon to smash into pieces those who threaten, frighten, appall, or just freak us out.

Mark Bellison (Ricky Gervais) is going through a bad patch in his life. He is a middle-aged man who is overweight and worried about losing his job at a film company that produces science and history documentaries, even though his boss (Jeffrey Tambor) hates to fire anybody. Mark's receptionist Shelley (Tina Fey) is glad to see him depart and bluntly tells him he's a loser. Brad Kessler (Rob Lowe), the top-dog at the film company, has no respect for Mark's work and actually hates him. Feeling overwhelmed by sadness, Mark has a blind date with Anna (Jennifer Garner), a stunningly beautiful woman who greets him at the door and answers his question "How are you?" with "A little frustrated at the moment. Also equally depressed and pessimistic about our date tonight." At dinner, he learns that her plan is to find a genetic match and have children. She bluntly tells Mark that he is definitely out of the running since he is not her physical equal.

Faced with eviction from his apartment, our anti-hero becomes the first person in this world to tell a lie. At the bank, the system is down, and he says he has more money in his account than he does; the teller naturally assumes what he says is true and apologizes for their system making a mistake. Astonished at how easy lying is, Mark is soon telling fibs to help out a homeless man and to convince his neighbor (Jonah Hill) that things will be okay and he doesn't need to commit suicide. Then in order to comfort his dying mother (Fionnua Flanagan), he describes a vision of eternity as going to a place where we are free from pain or worry, united with our loved ones, given a mansion to live in, and treated royally.

When word spreads that Mark has described an afterlife instead of eternal nothingness after death, he finds a throng of people outside his apartment who all want to know more about Heaven. He makes up a story, writes his statements on two pizza boxes, and delivers his revelations about "the Man in the Sky." They include details about doing good, disaster, judgment, and mercy. Mark also makes up a new episode in history that saves his job and propels him to fame and wealth as the best screenplay writer of his era. The only challenge left to this accomplished liar is to win the heart of Anna who has connected with the odious Brad as her genetically perfect potential mate.

The one point that The Invention of Lying makes crystal clear is that the rigid rejection of all lies is sheer folly. Today people can justify all kinds of deceptions including white lies (contrast the nasty honesty of characters in the film with the social lubricant of these polite expressions that are so common in our everyday conversations), to lies to the sick and dying, and lies to enemies. In one of his essays, Montaigne wrote:

"If, like truth, the lie had but one face, we would be on better terms. For we would accept as certain the opposite of what a liar would say. But the reverse of truth has a hundred thousand faces and an infinite field."

In like manner, the absolutism of Christianity or any other religion (atheism as well) is subject to the reality of many interpretations of God, reality, ethics, and the afterlife. Comforting descriptions of Heaven have always been concocted out of our imaginations and our yearning for a life beyond this one; no matter what your religious beliefs, you still can't know for sure what happens after death — that's a mystery. Gervais and Robinson have provided us with a moral service by bringing us back down to earth and helping us see the complicated choices that must be made every day as we struggle to deal with the stories we tell ourselves, the sharp edges of honesty, and the lies which can both harm and heal our private and public lives. 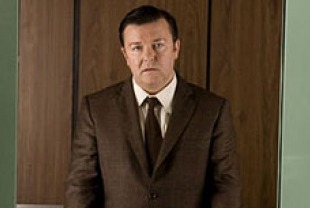 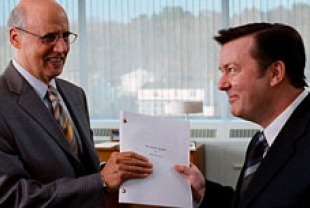 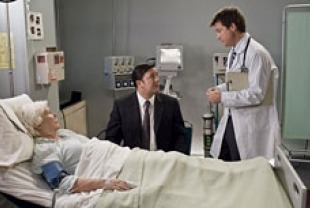 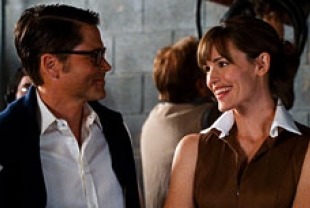 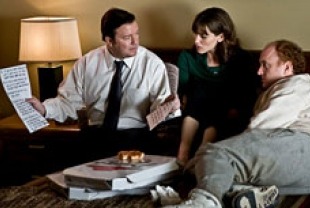 PG-13 - language, including some sexual material and a drug reference