The Yes Men Fix the World

Directed by Ady Bichlbaum, Mike Bonanno
Clever and hard-hitting attacks on the dishonesty, greed, and ethical malfeasance of corporate America.

We loved the first film about The Yes Men (2003), two political activists that author Naomi Klein has characterized as "the Jonathan Swift of the Jackass generation." In this clever and hard-hitting film, Andy Bichlbaum and Mike Bonanno take on the greed and malfeasance of corporate America. To give us an example of the way free-market gurus think, they present interviews with think-tank experts who praise the values of corporations, the profit-making incentive, endless growth, and the positive consequences of deregulation and no government interference. The Yes Men, wanting to fix the world, decide to expose some of the lies, cruelties, and excesses resulting from this way of thinking promulgated by Milton Friedman.

In the first segment, the Yes Men set up a phony Dow Chemical website and get a chance to pull off a prank at the company's expense. The BBC, promising 300 million viewers, arranges an interview with Andy who poses as a representative of Dow. On the air, he claims the company is ready to take full responsibility for the largest industrial disaster in history on behalf of Union Carbide (which they recently purchased): a $12 billion dollar plan to clean up the mess in Bhopal, India, and settle with the victims. Imagine the shock of these two crusaders for justice when they learn that after their TV announcement, Dow's stock plunged $2 billion in value! But after thinking about it for a while, the Yes Men realize that it is only natural that the financial community would punish any corporation that seeks to put human welfare above profit-making.

In two other segments, the Yes Men take on two giant corporations, Halliburton and Exxon. At a Halliburton meeting, they show up as substitute speakers and demonstrate "Survivaballs" designed to provide security in natural disasters. Although the balls are ridiculous, the corporate executives ask questions and seem interested in them as possible devices against terrorist attacks. In the second segment, the Yes Men go even further with a stunt at an energy conference where they try to peddle a new biofuel called "Vivoleum" made from human victims of climate change.

And, finally, intent on proving that government is acting more and more like corporations, the Yes Men pose as representatives of the U.S. Department of Housing and Urban Development with a plan to restore shuttered public housing in New Orleans. HUD is not happy but tenants who have been treated shabbily by this national agency salute the filmmakers for bringing their case to the attention of the public.

The final segment deals with the Yes Men's distribution of over 100,000 copies of their own positive edition of The New York Times with headlines such as "Iraq War Ends," "Court Indicts Bush on Treason Charges," and "Nationalized Oil to Fund Climate Change Efforts." One of the ironies throughout the film is how much the corporate spokespersons whine about the Yes Men's activities, claiming they should be ashamed of themselves for misrepresenting their activities. And our response to them would be: How about the ads running on television in which corporations falsely represent themselves as ecological saints, communities who are working for the welfare of all, and idealists who want a better future for all children!

Special features on the DVD include deleted scenes; additional footage of Yes Men antics including "The Horribly Stupid Stunt Which Led To His Untimely Death," a 24-minute short film in which the Yes Men pose as the World Trade Organization; the theatrical trailer; and filmmaker biographies. 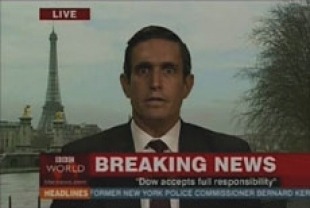 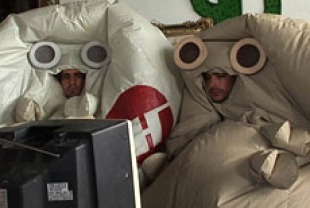