Directed by Claire Denis
A vivid depiction of the barbarity, violence, and madness of African civil wars.

A French-speaking country in Africa is in the midst of a brutal civil war. A band of rebels consists mainly of child soldiers who are looking for adventure and the whereabouts of "the Boxer," (Isaach De Bankole) whom they want to have as their warrior leader. Chased by the government forces, he finds sanctuary at the coffee plantation of Maria Vial (Isabelle Huppert). The terrorism practiced by both sides sends civilians fleeing from the plantation. The departing French soldiers want Maria and her family to leave but she refuses to do so. She receives no support from her father-in-law, Henri (Michel Subor), who owns the plantation; her ex-husband Andre (Christopher Lambert), who has made a deal with the mayor (William Nadylam) to escape; and her lazy son Manuel (Nicholas Duvauchelle).

This gripping French film written and directed by Claire Denis is a far cry from the subtlety and creative daring of her first film, Chocolat, also set in Africa and focusing on the adventures of a woman. But it does manage to vividly convey the barbarity, tensions, and violence of civil wars on this continent. The blacks on both sides may not agree on much but they do share a hatred for whites whom they derisively call "white material."

Maria struggles valiantly to harvest a coffee crop in the midst of so much turmoil and bloodshed. A scene which captures the madness of war follows the murder of several pharmacists; the young militants dump the drugs on the ground and then gobble them up as if they were candy. After being scared out of his wits, Manuel flips out and joins the rebel forces. Violence begets more violence.

Special features on the DVD include new interviews with director Claire Denis and actors Isabelle Huppert and Isaach de Bankole; a short documentary by Denis on the Films Premiere at the 2010 Ecrans Noirs Film Festival in Cameroon; a deleted scene; and a booklet featuring an essay by film writer Amy Taubin. 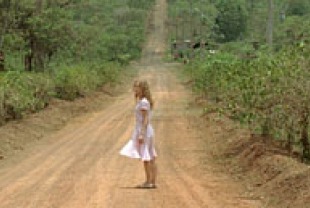 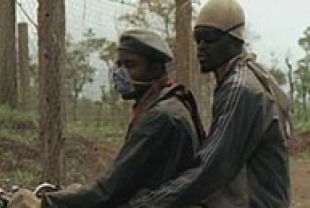