Directed by Mira Nair
A biodrama about an extraordinary woman aviatrix who followed her passion and blazed a trail for others to do the same.

Amelia Earhart was an extraordinary woman (1898 - 1937) who loved to fly; she described herself as "a vagabond of the sky." This biodrama covers her years in the spotlight, due as much to her personal charisma as her daring exploits.

Amelia (Hilary Swank) gets her big chance to prove her mettle in 1928 when she became the first woman on a flight across the Atlantic. Although she didn't pilot the plane, her courage was saluted by many. In 1931, she marries the man who hired her for that adventure, George P. Putnam (Richard Gere), a publishing magnate. A skilled promoter, who proudly calls his new field "public relations," he finances her future flights via a slew of public appearances, advertisements, and sponsorships. Under his guidance, Amelia becomes one of America's first modern celebrities. She even has her own line of clothes.

Before marrying George, she told him that she didn't want a life imprisoned in safety. He gave her the freedom she needed. Amelia later fell in love with pilot and teacher Gene Vidal (Ewan McGregor) who, thanks to her intervention, joined the Roosevelt Administration as the head of the brand new Bureau of Air Commerce. Besides being deeply attracted to each other, they shared a mutual passion for flying and the dream of advancing the cause of aviation in America.

In 1932, Amelia became the first woman and second person to fly solo across the Atlantic. Landing in Ireland, she instantly became a world celebrity. Among her many other activities over the years, Amelia was instrumental in setting up the first women's pilots' organization, and she took Eleanor Roosevelt (Cherry Jones) on the First Lady's first-ever night flight. But everything else was small potatoes when set against this ambitious and daring aviatrix's yearning to make a 27,000 mile flight around the world with Fred Noonan (Christopher Eccleston), a very talented and seasoned aerial navigator.

Amelia is directed by the award-winning Mira Nair (The Namesake, Vanity Fair, Monsoon Wedding) based on a screenplay by Ron Bass and Anna Hamilton Phelan. It is a combination adventure saga and love story about a woman who followed her passion and blazed a trail for others to do the same. Academy-Award winner Hilary Swank vividly captures and conveys Amelia's Midwestern spunk, her romantic yearning, her stubbornness, and her fame in an age dominated by men. Her bravery was founded on an ability to confront her own fear squarely and honestly. Amelia once wrote:

"Courage is the price which life
Exacts for granting peace.
The soul that knows it not, knows no release
from little things;
Knows not the livid loneliness of fear
Nor mountain heights, where bitter joy can hear
The sound of wings." 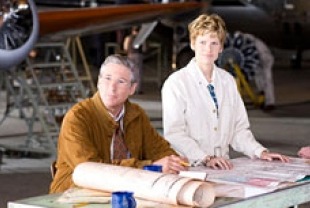 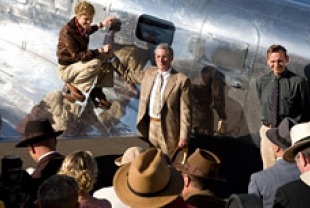 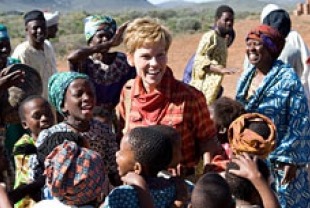