Directed by Clint Eastwood
An astonishing movie about the power of forgiveness, the importance of sports, the art of transformative leadership, and the reconciliation of the races.

After 27 years in prison, Nelson Mandela returned to politics and was elected in 1994 as the first black president of South Africa, a country that had been torn apart by years of violent and divisive racism. Mandela's spirituality was built around the ideal of forgiveness, the practice of reconciliation, and everyday kindness and courtesy. The challenge facing him was to find a way to unify the country's white and black citizens without slighting either group. He came up with an unusual solution which is vividly and beautifully depicted in Invictus, an extraordinarily spiritual film directed by Clint Eastwood with a screenplay by Anthony Peckham based on the book Playing the Enemy by John Carlin. The title is Latin for "unconquerable" and comes from a famous 1875 poem by British writer William Ernest Henley.

After Nelson Mandela (Morgan Freeman) becomes President of South Africa, the newspapers ask the question on everybody's minds: He can win an election but can he run a country? Many think that civil war is a real possibility unless a way can be found to meet black aspirations and quell white fears. On his first day in his new job, Mandela asks white staffers who served in the government of President de Klerk to stay on and work with him. He stuns Jason Tshabalala (Tony Kgoroge) and Linga Moonsamy (Patrick Mofokeng), the leaders of his personal bodyguards, when he asks them to work side by side with Hendrick Booyens (Matt Stern) and Etienne Feyder (Julian Lewis Jones), white members of the Special Branch who not long ago were terrorizing blacks with their strong-arm tactics and racist hatred. At first they resist their "Comrade President," until they realize how important it is to have members of both races as the visible members of his staff.

The new bodyguards are astonished at the hours of activity that Mandela puts in every day and even more amazed at his personal attention to their lives with questions and appreciatory remarks. Brenda Mazibuko (Adjoa Andoh), his chief of staff, wants him to concentrate on economic matters and foreign affairs, but Mandela comes up with his own creative plan to unify the divided country into a "rainbow nation." When he learns that a sports commission wants to abandon the mainly white national rugby team, the Springbok, the President appears before them and gives a passionate speech saying that by taking away the rugby team from the Afrikaners, they will be widening the rift between the races and starting a new cycle of hatred and fear. Even though the team and its emblem remain to many blacks a symbol of apartheid, Mandela is convinced that things can be turned around by taking another path of action. Sensing the mood of revenge and payback in the room he says: "The rainbow nation starts right here. Reconciliation starts right here. Forgiveness starts right here." This stirring call is not just words but a call to conscience, one which Mandela had forged in regard to his enemies during many years of prison and forced labor.

Francois Pienaar (Matt Damon), the captain of the Spingbok rugby team which has been losing regularly, is shocked when he receives an invitation to tea with the President. Mandela tells him how important it is to inspire everyone to be a part of the adventure of building a strong, healthy, and prosperous new nation. He shares with the non-political athlete how leaders can help people to exceed their expectations and to accomplish incredible things. He lifts Pienaar's spirits and helps him to see the possibility of the rugby team miraculously turning itself around and winning the World Cup. As further inspiration, Mandela sends the athlete a copy of "Invictus," the poem he relied upon during many years of imprisonment with its telling lines: "I am the master of my fate. I am the captain of my soul."

Director Clint Eastwood works his cinematic magic once again in an astonishing and incredibly entertaining film that is a special blend of spirituality and sports, a study of transformative leadership, and a soulful presentation of the races coming together in a common dream. Morgan Freeman puts in an Academy-Award caliber performance as Mandela, an ethical master, a crafty politician, a charismatic leader, a model of courtesy, and an enthusiastic sports fan. We are awed by his energy, his courageous stands, and his ability to follow his own instincts for what is right and good, despite the advice of some of the others around him.

But the most stirring message of Invictus is its affirmation of the power of forgiveness. Mandela says that it liberates the soul and removes fear. By his constant actions to bring about reconciliation between the races, he shows how forgiveness releases us from the rigid restrictions of revenge and opens our hearts to those who have wronged us. In a time when the ancient and futile battle between "us" and "them" still holds sway over so many leaders and ordinary citizens, Invictus stands out as a beacon of light calling us to a more compassionate and loving path.

Special features on the DVD include "Matt Damon Plays Rugby: Turning a Hollywood Star into a Rugby Player" and an Invictus music trailer. 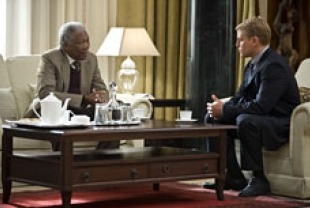 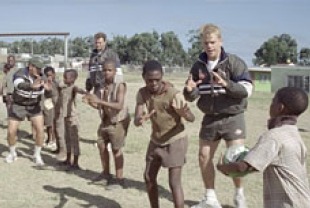 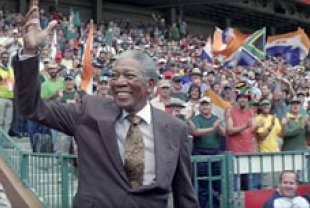 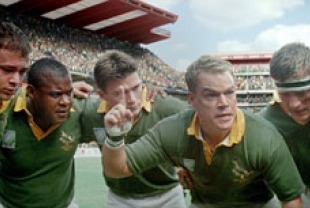 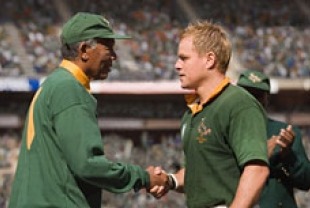