Directed by Mat Whitecross, Michael Winterbottom
The backstory to the political and economic landscape of our times and reasons why the rich are getting richer.

If you are troubled by the growing gap between the rich and the poor in America and elsewhere, this documentary will clear some things up for you about how the powerful have rigged the political game to give themselves even more wealth. If you were angered by the use of torture by the U.S., you will see how it has been used for years as an instrument of oppression in various houses of pain around the world. If you have been turned off by American imperialism, you will see how the so-called spread of freedom has resulted in staggering profits for the favorite corporations of political leaders in Washington, D.C.

Michael Winterbottom (Welcome to Sarajevo, The Road to Guantanamo) and Mat Whitecross direct this enlightening documentary about the power plays of the rich and the amoral who have promoted their free-market policies around the world over the past 40 years. How have they done this? By capitalizing on catastrophes and exploiting weakened governments and peoples. The film is based on investigative reporter and bestselling author Naomi Klein's book The Shock Doctrine. She calls this invidious process "disaster capitalism" which has resulted in the rich getting richer and while the poor and the middle class are denied solvency. Big corporations thrive and ordinary people lose ground.

Winterbottom and Whitecross use archival footage of wars, strikes, and civil turmoil to illustrate the free-market ideas economist Milton Friedman and his disciples at the University of Chicago. The story of how his doctrine was applied begins with President Nixon's successful attempt to end the left-wing government of the democratically elected president Salvador Allende in Chile. The U.S. backed the military dictator General Pinochet, who then administered "political shock therapy" through large-scale killings; "economic shock therapy" through the denationalization of the country's industries; and torture against so-called enemies of the state by using isolation, loss of a sense of time, and bodily harm. The intent of this shock was to "cleanse" the minds of those who refused to go along with the regime. These techniques were developed by the CIA and taught to right-wing Latin American military forces by the School of Assassins, a.k.a. the School of the Americas.

This model, according to the filmmakers, was used by the Argentine Junta who added their own special twists like stealing the babies of female enemies of the state and giving them to military families. One of the biggest supporters of General Pinochet was Margaret Thatcher who had a hard time selling Friedman's theories to British citizens until she went to war in 1982 over the Falkland Islands. After that, she put into place a crusade to break the trade unions. This segment of the documentary is followed by what happened after the fall of Communism in the Soviet Union and Eastern Europe.

In recent years, we have seen the devastating effects of the war in Iraq on its peoples. What has not been consistently spotlighted by the press is the systematic profits which have come into the greedy hands of corporations. This is another example of the Shock Doctrine.

This film is very timely; it provides the backstory for the political and economic challenges which lie ahead of us. After its screening at the Sundance Film Festival, it is available on-demand from the "Sundance Selects" program available through many cable systems and Directv. 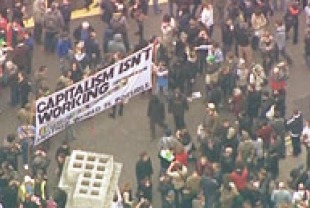 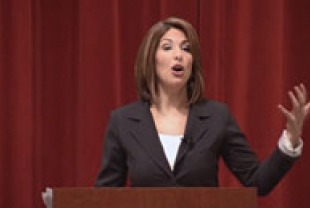