Directed by Lasse Hallstrom
An engaging romantic love drama that morphs into a deeper and richer consideration of the truly transformative power of love.

"Love is an art involving skills that must be developed and practiced over a lifetime," philosopher and freelance theologian Sam Keen has written. It begins with the exhilarations of romantic love where swoon and spontaneity open us up to each other. Then there is the leap in the dark which is required in making a commitment to stand by each other and be true to one another over the long stretch of time. The hardest part of a love as an art is having the patience and the perseverance to handle the oatmeal phase of intimate relationships where the pressures and tedium of everyday life test our love. All of these stages are part of Dear John, a drama directed by the inimitable Lasse Hallstrom (My Life as A Dog, The Cider House Rules, Chocolat, An Unfinished Life, What's Eating Gilbert Grape). The screenplay by Jamie Linden (We Are Marshall) is based on the bestselling novel by Nicholas Sparks.

John Tyree (Channing Tatum) is a Special Forces soldier who enlisted after graduation from high school. He is on leave from Germany visiting in South Carolina with his shy and soft-spoken father (Richard Jenkins), who methodically tends to his astonishing collection of coins. John has inherited from him a love of these rare objects and the mysteries they carry with them. One day while surfing on the beach, he stops for a rest and impulsively retrieves a young lady's purse which has fallen into the ocean.

Savannah Curtis (Amanda Seyfried) is a college student on summer vacation who lives with her wealthy parents in a luxurious beach house. John and Savannah are immediately attracted to each other much to the dismay of a longtime male friend who hangs out with her. They are radical opposites: he is quiet and she is very social; he was once a tough guy and she is an activist building houses for Habitat for Humanity; he is poor and she is rich; he sees himself as a realist and she is an idealist. But the summer sun shines favorably upon them as they savor the joys and surprises of loving and being loved over a two-week period. When the time is up, he returns to Germany and she goes back to college. They agree to write letters to each other and they keep to that promise.

On his second leave, John meets Savannah's family and draw closer to Tim Wheddon (Henry Thomas), her neighbor who is divorced and raising a son (Braeden Reed) with autism. It is Savannah's closeness to this child that compels her to suggest to John that his father also suffers from autism, which would explain his difficulty communicating to others. John is offended at the suggestion, and it causes the first rift between them. But this observation is important to Savannah who has dreams of using her parents' horse farm as a nurturing place for autistic children. Just before returning for his next assignment tour of duty, John promises Savannah that once this time overseas is over, they can be together permanently.

Those who intuit that love is an art that must be learned understand that there will be setbacks, betrayals, disappointments, and periods of disillusionment. John and Savannah have theirs and each movie-goer will have his/her own view of who is to blame. But that is the not the crux of the story: She gives him a deeper appreciation and sensitivity toward his father, the only other person on earth who has loved him. Once John has responded to this gift, he is able to perform his own magical and miraculous act of generosity which signals and affirms the transformative power of love.

Special features on the DVD include an alternate ending; outtakes; deleted and alternate scenes; and a conversation with director Lasse Hallström and actors Channing Tatum and Amanda Seyfried. 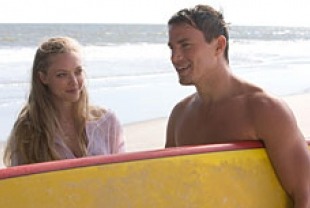 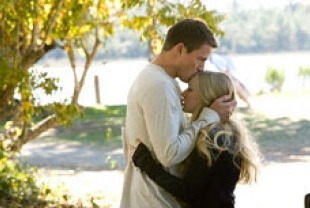 PG-13 - some sensuality and violence