Directed by Hayao Miyazaki
A celebration of feminine sensitivity, the importance of the spirit world, respect for nature, and the pre-eminence of the spiritual practice of kindness.

Satsuki (voiced by Dakota Fanning) and her four-year-old little sister Mei (Elle Fanning) are on their way with their father (Tim Daly) to a new house in the country. Their mother (Lea Salonga) is sick with an unspecified illness in a nearby hospital. The girls miss her and hope that she will join them soon. When they arrive at their new home, they find that it is a decrepit place. Granny (Pat Carroll), a neighbor who stops by to help them unpack, says the place is haunted. This doesn't scare the curious and intrepid sisters who are busy exploring: they enter the kitchen and find it overrun with black fuzzy balls that quickly exit in their presence. Granny explains that they are just "soot sprites" which gravitate to empty houses and are sure to hit the road once they hear the sound of laughter. There already is plenty of that emanating from Satsuki and Mei who are filled with rambunctious energy and peals of delight. While in the attic, they scare away all the soot sprites and throw open the window to air out the space.

Just within this brief chunk of this Japanese film written and directed by Hayao Miyazaki, he has imaginatively created alternatives to the traditional animated film in the West. Instead of leading male characters, the two central figures here are female. The haunted house is not a scary place filled with terrible creatures but a space inhabited by beings we cannot understand or control. When they make their presence known, they are accepted by Satsuki, Mei and her father. Here the world of spirit is taken seriously, perhaps because of the pervasive influence of Shintoism in Japan where nature and all her mysteries are reverenced.

One day while Satsuki is in school and her father is absorbed in his work at home, Mei follows a strange little creature out of the back yard and into the nearby woods. She comes upon a great and ancient tree and tumbles down a hole at its base. There she encounters a gigantic creature who is asleep on his back. He is not a monster but a friendly and cuddly being she names Totoro after a troll she once read about. She sits on his chest, tickles his nose, and he awakes with a ferocious roar. But then, sensing her gentle nature, Totoro smiles with pleasure in her presence. Later, Satsuki and her father find Mei asleep on the ground. She shares with them details about this wonderful encounter with her new friend.

In the Western animated picture, any child that wanders alone into the forest is subjected to multiple fears and dangers. Nature, instead of being depicted as it is here as something to be explored and appreciated, is designated as an enemy not to be trusted. Think of the colonists seeking to dominate and subdue the wilderness, followed by the pioneers and settlers. Little Mei's trust of the forest as a playground leads her to the hollow at the bottom of a tree trunk and to the enchanted and cozy home of Totoro.

Here again, we are given a different image of the large strange creatures. Although on first impression he seems to be a monster, he turns out to be "a neighbor." In the West, he would have been a terrifying creature bent on bringing harm to little Mei. He would have tried to destroy the family home, forcing them defend it and their dream of a new life in the countryside. This kind of dualism which pits the good family against a dangerous threat is the standard in animated films in the West. The result of repeating this dualism again and again is the equivalent of brainwashing a generation of children so they grow up to be adults convinced that the world is a battleground where the forces of good battle the evil-doers. Western culture has been warped by this perspective, and it has caused strife at home and thousands of deaths overseas in countries characterized as evil.

Contrast this cumbersome concept with the lightness of being in one of this story's playful scenes. Waiting one night in the rain for their father to arrive on a bus from work, Satsuki and Mei share an umbrella. When Totoro appears out of nowhere and stands next to them, they hand him an umbrella. After bumbling around with it, he finally puts it over his head. Delighted to hear the drops of water above him, Totoro jumps happily up and down, shaking loose more raindrops from the trees. It is a simple and magical moment of communion between the three of them.

The two most dramatic scenes in the film are when the two sister's mother takes a turn for the worse on the weekend when she is scheduled to make her first visit to their new home and when Mei gets lost while on her own little mission of mercy. In both instances, Totoro is there to help and in one of them, Satsuki is given the privilege of riding in his comfy Cat Bus that scurries through the countryside.

My Neighbor Totoro, originally released in1988, is a path-finding animated film that set Miyazaki on a journey that has resulted in an unprecedented series of masterpieces: Princess Mononoke, the Academy Award-winner Spirited Away, Howl's Moving Castle, and Ponyo. His fertile imagination consistently dazzles our vision with exquisite, quaint, and colorful images. And his storylines are packed with spiritual nuances.

This special edition 2-Disc DVD includes a storyboard presentation of the story and "The World of Ghibli" in which we learn about the film's inspiration through documentaries, including new inerviews with Hayao Miyazaki. 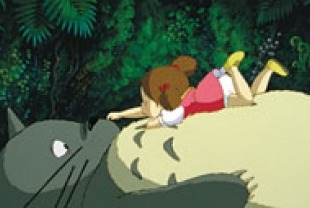 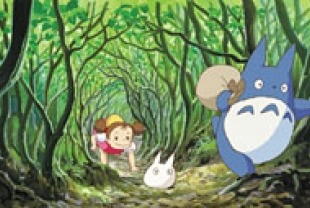 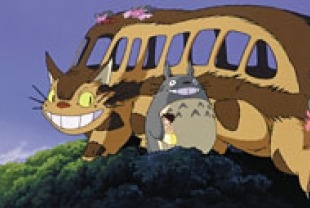