Directed by Tom DiCillo
A fascinating documentary about the amazing rollercoaster ride of Jim Morrison and the Doors who tried to break on through to the other side.

Director Tom DiCillo's obsession with Jim Morrison and the journey of the Doors to worldwide fame and glory is highly evident in this salutary documentary. There are many incisive insights into this Dionysian singer and poet who took the band's name from a passage by William Blake: "If the doors of perception were cleansed, everything would appear to man as it is: infinite." The narration by Johnny Depp captures and conveys the flare, the controversy, and the divisiveness of the band and their charismatic lead singer. And for those who are entranced by the music of the Doors, When You're Strange won't disappoint with its heavy dose of selections from their varied repertoire.

Jim Morrison met keyboardist Ray Manzarek when they were both film students at UCLA. One of Morrison's films is used early on in the documentary, and we see why this was definitely not the right career path for him. His was meant to sing, and he is ranked 47th on Rolling Stone's 100 Greatest Singers of All Time. Other members of the band include John Densmore on drums and Robbie Krieger on lead guitar. Together they fashioned a distinctive rock sound demonstrated so vividly in their signature song "Light My Fire."

We watch as these four young men get caught up on a rollercoaster ride to global success with one hit single after another, appearance on The Ed Sullivan Show, and concert tours all over the country. Morrison has trouble adjusting to the frantic pace. First his alcoholism tarnishes the band's reputation; then he moves on to heavy drug use. His self-destructiveness causes problems for the other band members but they all know that Morrison is the chief attraction for audiences. His excesses match the emotional turmoil of the rebellious youth during the late 1960s who were caught up in their own psychedelic explorations.

When You're Strange is a fascinating documentary about the amazing rollercoaster ride of Jim Morrison and the Doors who tried to break on through to the other side.

Special features on the DVD include an exclusive interview with Jim Morrison's father, Admiral George C. Morrison, USN (Ret.), who until this interview, had never publically discussed his son's life. 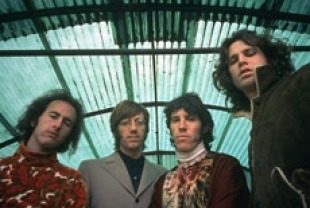