Directed by Ridley Scott
A rousing and well-acted screen interpretation of the backstory of Robin Hood before he became a heroic outlaw and champion of the poor.

Welcome to the 12th century where European kings rule by divine right and feel entitled to do whatever they want including going off to the Crusades and slaughtering infidels in the name of Christianity. It is a time when the gap between the rich nobility and the poor commoners is wide and unsurpassable. It is a time when war is perpetual and men sacrifice their lives for more power, wealth, or prestige. All these signs of the times are evident in Ridley Scott's adventuresome screen portrait of Robin Hood. This rousing drama is filled with conflict, ethical choices, and first-rate acting. It is ultimately about the connections which draw people together rather than keep them apart.

Robin Longstride (Russell Crowe) is an archer in the band of warriors who have accompanied Richard the Lionheart (Danny Huston), King of England, to the Crusades. Now returning home, they are taking what they can from French villages and castles. In a critical scene, the King asks Robin to honestly tell him what he thinks of his actions in the battle against the Muslims. He tells Richard that he did wrong by murdering women and children. For his truth-telling, Robin and his friends wind up in the stocks; they are able to escape in the confusion after the King is killed in battle. Later, they witness the ambush of the small party taking the King's crown to England. Robin promises a dying Sir Robert Loxley (Douglas Hodge) that he will deliver his sword to his father in Nottingham. He assumes his identify and dressing as nobles, he and he friends travel to England.

Richard's hedonistic brother John (Oscar Isaac) becomes King much to the dismay of his mother (Eileen Atkins), Eleanor of Aquitane. He fires the chancellor (William Hurt) and hires Godfrey (Mark Strong) to lead an army to gather unpaid taxes from rebellious barons and to wipe out all those who refuse. Meanwhile, Godfrey is supplying information to the King of France who planning to attack England.

Arriving at Nottingham, Robin meets Sir Walter Loxley (Max von Sydow) and his beautiful, independent, and feisty daughter-in-law Marion (Cate Blanchett). The blind old man asks this stranger to do him a favor and assume the identity of his deceased son so that upon his death, Marion can maintain control of their land. Much to Marion's initial dismay, Robin is to sleep in her bedchamber so the servants and the community are convinced he is her husband returned from the Crusades.

This movie provides one possible backstory of the legendary hero known as the outlaw of Sherwood Forest who robbed the rich to help the poor. Director Ridley Scott, known for his action movies, makes the most out of the battle sequences, including a huge clash at the shore between the French and the English. He also artfully conveys the slow-blooming romance between Robin and Marion, the crucial knowledge Robin picks up about his father's legacy to him, the birth of the Magna Carta, and the amorality of kings whose lust for war is insatiable. The screenplay by Brian Helgeland is filled with all the elements which make this kind of movie so gripping. The music by Marc Streitenfeld offers a mesmerizing accompaniment to the many different moods in the story. 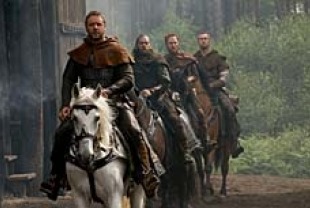 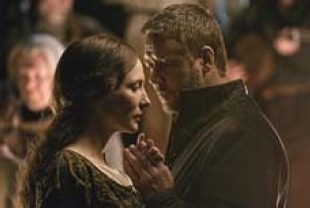 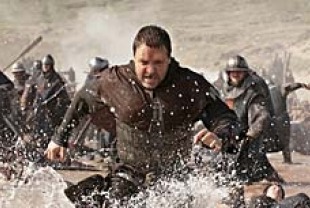