Directed by Paul Fierlinger, Sandra Fierlinger
A funny, charming, and witty animated feature based on J.R. Ackerley's masterful memoir about his loving relationship with his dog.

In 1965, the British man of letters J.R. Ackerley published My Dog Tulip — a smart and sassy account of his wonderful 16-year relationship with an Alsatian (German Shepherd dog) that was called "one of the greatest books ever written by anybody in the world" by the literary bon vivant Truman Capote. (Now there's a book blurb to savor forever.) Christopher Isherwood chimed in with more high praise by calling the memoir "one of the greatest masterpieces of animal literature." No wonder Paul and Sandra Fierlinger decided to adapt it for the screen as an animated film.

Besides being such a literary champion, My Dog Tulip has another distinction: it is the first animated feature ever to be entirely hand drawn and painted using paperless computer technology. In addition, Sandra and Paul Fierlinger have written a screenplay which is packed with witty and wise insights into human and animal behavior!

Ackerley (voiced by Christopher Plummer) is a London man who loves solitude. His life is completely transformed after he adopts Tulip. She turns out to be the love of his life, the one who, he says in the voiceover, "offered me what I had never found in my sexual life — constant, single-hearted, incorruptible, uncritical devotion, which is in the nature of dogs to offer." Ackerley is mystified by all her energy and curiosity: "It seems so wonderful and strange that she should find the world so beautiful." Ackerley and Tulip's walks are a tug-of-war in which Tulip is the winner. And when he lets her run free there is always the danger of her doing her business out of his sight. In one instance, Ackerley tries to assuage some angry store owners by scrubbing down the sidewalk where she has pooped. As Tulip's awkward and often bumbling caretaker, the author gets to know a lot about "liquids and solids," and he gifts us with a lecture based on his many observations of the dog's urination practices and what they signify.

There is a funny segment during which Ackerley's sister (Lynn Redgrave) tries to win Tulip away from him by various clever tactics. He also has a bad experience with veterinarians until he meets Miss Canvenini (Isabella Rossellini) who has Tulip's best interests at heart.

Perhaps Ackerley's most challenging assignment is finding a mate for his finicky Alsatian. He characterizes the dog as "independent, unapproachable, dignified, and single-hearted" — qualities which come into play in her encounters with possible mates, including Max and Chum, who are rejected in favor of Dusty, a mongrel from the neighborhood. Ackerley is delighted with Tulip and Dusty's eight puppies but less than enchanted with the difficult process of finding homes for them.

After watching this delightful and totally winning animation feature, we recalled Gary Kowalski's magical description in The Souls of Animals:

"Everyone needs a spiritual guide: a minister, rabbi, counselor, wise friend or therapist. My own wise friend is my dog. He has deep knowledge to impart. He makes friends easily and doesn't hold a grudge. He enjoys simple pleasures and takes each day as it comes. Like a true Zen master he eats when he's hungry and sleeps when he's tired. He's not hung up about sex. Best of all, he befriends me with an unconditional love that human beings would do well to imitate."

We agree. Bark! bark! So does Tulip! 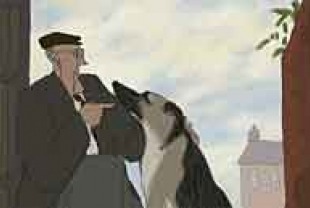 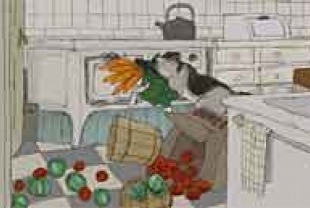 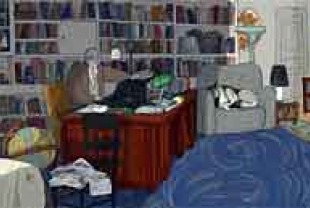