Directed by Jann Turner
An incredible South African road movie and comedy about love, friendship, honesty, and the common ground that can unite former enemies.

Elvis (Kenneth Nkosi) is in a South African bus terminal on his way to his bachelor party hosted by his best friend and best man Tumi (Rapulana Seiphemo). But when he helps a little girl who has been separated from her mother, he misses the bus and the evening of fun. Meanwhile, in Cape Town, Ayanda (Zandile Msutwana) is handling all the complicated details of her wedding to Elvis in a few days. Much to the dismay of her more traditional African mother (Sylvia Mngxekeza), she has chosen a "White Wedding" with a beautiful dress, a wedding planner, and large reception at a luxurious hotel. Her energy is drained by all the responsibilities and pressures — one of which is the return of her handsome, wealthy, and charming ex-boyfriend Tony (Mbulelo Grootboom). His presence along with her mother's stubborn insistence in preparing a large feast with her many friends adds to her stress.

When Elvis finally arrives at Tumi's place, their departure is delayed when Tumi's latest girlfriend trashes their car. But they find another and, on the road to Cape Town, they try to share their pumped-up feelings about the wedding. They also reminisce about the past, with Elvis offering some advice to Tumi about the virtues of honesty and commitment in an intimate relationship. Along the way, the men encounter Rose (Jodie Whittaker), an English doctor who has abandoned her best friend after learning that she had sex with her former boyfriend. She convinces Elvis and Tumi to let her come along with them to Cape Town. More delays ensue when Elvis stops for a relative of his fiancée who refuses to join them and orders them to take along a goat for the wedding feast. After an accident, Rose proves very helpful.

While the car is being fixed, Elvis, Tumi, and Rose walk into a sports bar filled with racist white South Africans. Elvis surprises them by singing a song popular with Afrikaners and then he encounters a gruff man who says to him: "First you want to take over my country, and now you want to take over my place in the bar?" It is a tense moment that Elvis defuses by buying him a drink and discussing something they have in common: the difficulty of handling women.

Elvis learns that Tony paid for Ayanda's wedding dress after Elvis's transfer of money didn't work. When the Afrikaner finds out that the three outsiders have no place to stay, he invites them to his home. His prejudiced wife is horrified and convinced that the two black men have kidnapped Rose and will undoubtedly harm or kill them. The Afrikaner calms things down after men from the community arrive with guns ready to fight. Learning that Elvis is already late for his wedding, he volunteers to drive them all to Cape Town.

White Wedding is a terrific road comedy directed robustly by Jann Turner who fluidly melds all the different locales and story elements into a very satisfying whole. Elvis's quest to get to his wedding on time is filled with comic incidents which explore the durability of friendship and the difficulty of remaining calm and patient while everything around you is chaos. Ayanda is also tested as she waits for Elvis to arrive and is forced to consider the depth of his commitment and the nature of his adult responsibility. But perhaps the most surprising and daring dimension of White Wedding is its treatment of the common ground that the Afrikaner and the two Africans find when they are thrown together. We need more movies like this that show that it is possible for former enemies to reconcile as they share the stores of their lives and touch the imponderables which animate all of our days. The depth of humanity that comes across in the quest and the wedding celebration which ends the drama is a sheer delight that will move the heart of even the most stoic filmgoer. 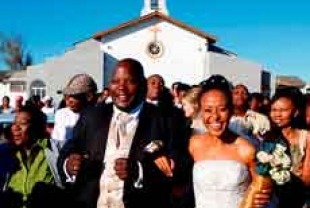