Directed by Francois Ozon
A compelling French drama that deals with a transitional period in the lives of two people whose encounter leads to fresh starts.

When we are hurting it is wise to seek out a refuge where we can rest, recoup our energies, and prepare for what is next in our lives. Very few people have the luxury of finding a private place far from the speed, noise, and hugger-mugger of city life. But there are the lucky ones who find a space where they can relax and rejuvenate without interference. Such is the case with Mousse (Isabelle Carré), a heroin addict who is in love with Louis (Melvil Poupaud), a big-time drug user. When he dies of an overdose, she finds herself in the hospital and is told that she is pregnant. Louis's wealthy mother states that she will pay for an abortion but Mousse decides to keep the baby in her womb.

An old lover has given Mousse a beautiful place by the sea where she retreats to heal her wounds, mourn the death of Louis, and figure out what she wants to do. She is taking methadone and shows no signs of still struggling with her heroin addiction. Louis's younger brother Paul (Louis-Ronan Choisy) drops by for a visit on his way to Spain. He spends his days at the beach and eventually meets another man from town. Mousse is surprised, given the sexual attraction she had been feeling toward him thanks to his physical similarity to Louis. It turns out that he has some of the same feelings for her that perplex him.

François Ozon (Under the Sand, Swimming Pool, 5X2) has said of the film in an interview:

For me, Le Refuge is the story of the healing process, which is violent and painful, but the story is told very gently. It's also about loss and doing without. Doing without drugs. Losing love. Losing someone.

Mousse and Paul are two people with no reason to be together; they never should have met, and yet they will confide in each other. They are both on the margins, seeking their identities.

François Ozon is in love with Isabelle Carré's face which can change and convey countless emotions and moods. In addition, he shows us the importance of transition — those times in our lives when we are between things and out of sync with the daily rhythms, moving from one thing to another and coping with both change and loss.

That is what Mousse and Paul share: an intimate encounter during a transitional period that ushers them into a fresh start in their lives.

Special features on the DVD include the original theatrical trailer and original music video by Louis-Ronan Choisy. 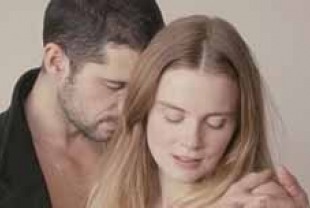