Directed by James C. Strouse
A mildly entertaining sports flick about a girl's basketball team and a chauvinistic coach who knows a lot about the game.

Bill Greaves (Sam Rockwell), a former Indiana high-school coach, has fallen on hard times. He is working as a lowly busboy and dishwasher when Terry Schemerhorn (Rob Corddry) offers him a job as coach of a girl's basketball team. Terry knows about Bill's alcoholism and has confidence that he can pull himself together enough to show his true colors. Terry also remembers that his friend was fired after members of his basketball team walked off the court in the middle of a state tournament to protest his inadequacy as a coach — a humiliation Bill still carries.

The girl's varsity basketball team is not supported much by the community. The players have off-court problems: one is in a relationship with the high school basketball star; another wonders what do about her secret lesbian desires; one is an African American who is prejudiced against all Hispanics; and another is being courted by an older man. Actually, the girls are as messed up as Bill: they could all be seen as failures who are capable of so much more if they only applied themselves.

Bill wants to turn their losing streak around and pull them into the winner's circle but he is his own worst enemy. Part of the problem is that his feelings of inadequacy are heightened by a rift with his teenage daughter, who rightly sees him as a schmuck.

James C. Strouse directs this mildly entertaining and morally instructive sports flick which brings to mind The Bad News Bears. Sam Rockwell does a fine job capturing Bill's escalating desperation as he struggles not to repeat his inglorious past once his team starts winning. 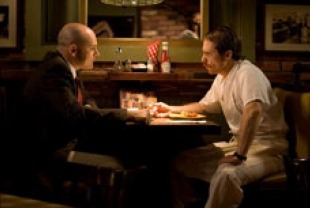