Directed by David Kaplan
A delightful drama about an aspiring chef who is lifted by the wisdom and craft of an Indian mentor, a Zorba the Greek-like character.

Samir (Aasif Mandvi) has been working for many years as sous-chef with Chef Steve (Dean Winters) who takes him for granted. He is not promoted because his boss says he lacks the "magic" needed to be well-respected in the field. Shamed and frustrated by this immense set-back, Samir tells Carrie (Jess Weixler), a supportive coworker, that he'll be leaving shortly to apprentice to a master chef in Paris. Back home in Queens, his parents are shocked by the news. His mother (Madhur Jaffrey) thinks that he'll now be able to make plans to get married. His father, Hakim (Harish Patel), is convinced that this set-back is yet another sign of Samir's incompetence. For years, he has compared Samir unfavorably with his deceased older brother. When his father is felled by a heart attack, Samir is forced to take over Tandoori Palace, the family business.

The place is in shambles with an incompetent chef, a dumb assistant, and a host whose stern look drives customers away in droves. Those who seem to enjoy the restaurant are three elderly male customers who meet regularly at their favorite table. Business is so bad that Hakim is getting ready to sell the place. Samir's run of bad luck comes to an end when he decides to hire Akbar (Naseeruddin Shah), a cabdriver who used to prepare meals for Indira Gandhi. He is a Zorba the Greek-type character who has traveled the world, worked many jobs, and savored the adventure and variety of life. Akbar brings new customers to Tandoori Palace with his unusual cooking skills. He tutors Samir, telling him not to cook from his brain or a recipe, but from his heart and gut. It is the key to the "magic" that the chef who fired him had spoken about.

Today's Special, directed by David Kaplan, is a total delight from start to finish. Aasif Mandvi, who stars in the film and cowrote it with Jonathan Bines, made a name for himself on the Daily Show. The screenplay is based on his Obie-winning play. The drama authentically conveys the father-son conflict which animates Samir to have such high expectations for himself. When he meets Akbar, he is transformed by this Indian wizard's joie de vivre and pleasure in the senses. Every aspiring young man should have such a vibrant and zestful mentor! Akbar lifts Samir to new heights and opens the door to a future beyond his wildest imagining. 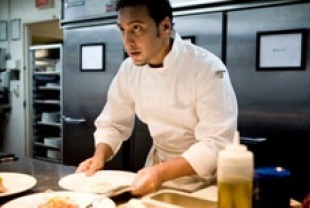 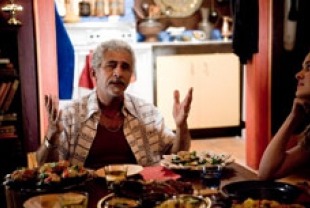