Directed by George Hickenlooper
A spunky depiction of the power-plays, greed, corruption, and grandiosity of GOP lobbyist Jack Abramoff, a larger-than-life wheeler-dealer.

Sadly, we have witnessed the failure of Washington leaders to wash out the corruption of wheeler-dealer lobbyists. But sometimes the law-breakers get caught and are put in prison. Casino Jack charts the rise and fall of Jack Abramoff, an ambitious and feared GOP lobbyist operating at the peak of his power during the George W. Bush presidency. In the opening scene of the film, he stands before his mirror and does a vituperative rant against mediocrity and dullness. Later in a voiceover sequence, Abramoff (Kevin Spacey) salutes the lobbyist's most precious commodity — influence. He sees himself as an invincible and brilliant Master of the Universe who can accomplish anything. Among his accomplishments are brokering deals with Tom Delay, the GOP leader, and many other conservative politicians who regularly receive contributions to their campaigns.

As a lobbyist-for-hire, Abramoff and his greedy protégée Michael Scanlon (Barry Pepper) have set up a series of very profitable deals with garment owners who are running off-shore sweatshops in the Marianas Islands, with American Indian tribes running casinos, and with a Florida gaming cruise-ship operation owned by a tough Greek entrepreneur (Daniel Kash). Abramoff gets in big-time trouble when he hires Adam Kidan (Jon Lovitz) as his middle-man in the deal. This mattress salesman is totally incompetent and winds up paying Big Tony (Maury Chaykin) to teach the Greek a lesson.

The late George Hickenlooper directed Casino Jack and is to be commended for putting together such a gifted cast and presenting such a complex portrait of the larger-than-life Jack Abramoff. It would have been easy to just stay with the crimes, the greed, and the power plays of this law-breaker, but the screenplay by Norman Snider manages to catch another side of the man — he prays regularly as a devout Jew; works out every day; is proud of Red Scorpion, a film he produced; plays Chopin on the piano in a moment of calm repose; loves his family; sets up the first kosher restaurant in Washington, D.C.; and has plans to build a private school.

Casino Jack may well have a sequel someday, since Abramoff will be released from prison this year after serving a six-year sentence. Who knows what he will do next!

Special features on the DVD include Casino Jack: a director's photo diary; a gag reel; and deleted scenes. 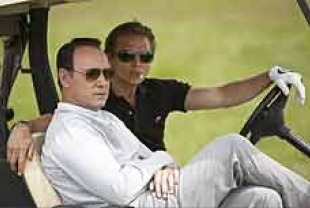 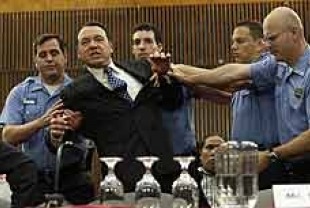