Directed by Michelle Esrick
A remarkable and rowdy documentary about a contemporary holy fool and saint who walks his talk about love.

There is a long and fascinating tradition of the holy fool in spiritual literature. These people follow the dictates of the heart and are often able to effect great works of mercy and compassion. Their brand of selflessness is free of reason's madness and the ego's frivolous grandeur. Holy fools pay no heed to the worldly pursuit of power, status, or financial success. That is why they are usually deemed crazy and branded as outsiders.

Saint Misbehavin': The Wavy Gravy Movie is a touching and enlightening documentary about the incredible life and work of a holy fool named Hugh Romney, later known as Wavy Gravy. This rowdy film, ten years in the making, was directed by Michelle Esrick. The archival footage from the 60s and 70s is a delight to behold along with the entertaining and informative interviews from Wavy Gravy's family and friends, cultural commentators, and music performers, including Jackson Browne, The Grateful Dead, Odetta, Bonnie Raitt, and Buffe Sainte-Marie.

Saint Misbehavin' begins with Wavy Gravy's ritual for the starting of the day where he asks for guidance and runs through a long list of adoring names for God. He ends with "bless this day as it transpires, and let me be the best Wavy Gravy I can muster." After going shopping for the forty member Hog Farm commune he has been a part of for 40 years, there is a flashback to the start of his creative and wide-ranging adventures.

As Hugh Romney he is active in the Beat movement during the late 50s, reading poetry at the Gaslight Cafe in Greenwich Village. He eventually convinces the manager of the place to give some folk singers a chance to perform. One of them is a Midwesterner named Bob Dylan, who wrote the first draft for "A Hard Rain Is Gonna Fall" in a room he shared with Romney.

Always seeking fresh directions for his creative spirit, Romney reinvents himself as a traveling monologist ("talking about weird stuff that had happened to me"). He creates the Phantom Cabaret with Tiny Tim and Moondog. But the lure of creating a better world with peace and harmony for all drew him to California in 1962. He married Bonnie, who would become known as Jahanara, in 1965 (they are still married after 45 years). In California, Romney hooked up with Ken Kesey's Merry Pranksters. Then he started the Hog Farm Commune and got involved in anti-Vietnam war protests.

The turning point in his career came when he was asked to provide Life Support for Woodstock in 1969. At this seminal countercultural event, Romney served as chief of the PLEASE force and the Hog Farm served up free meals and provided assistance for those having bad drug trips. Soon after Woodstock at a Texas Musical Festival, musician B. B. King gave him the name Wavy Gravy. In the same year, this busy activist suffered severe back problems and was put in a full body cast which he whimsically called "the All-Star cast." His comic sense was not diminished by this physical challenge: Wavy Gravy ran "Nobody for President" campaigns which satirized political gridlock and corruption in America. By this time, he had given up dressing like a prophetic fool and decided that a clown persona was more appealing to people, especially children he visited in hospitals. Plus, when he was dressed as a clown, he didn't get beat up at demonstrations as much!

To this day, Wavy Gravy derives great pleasure out of Camp Winnarainbow which he founded in 1974 as a circus and performing arts retreat for children. He also has raised money over the years for the Seva Foundation which provides eyesight saving surgeries to people in Tibet and elsewhere — more than 2 million people to date. The genesis of this humanitarian effort was a cross-continent bus tour from Europe to India in which the American "hippies" provided food and other help to poor people.

The song "Basic Human Needs" by Wavy Gravy gives concrete expression to his love for human beings and his desire to create a more compassionate world:

"Wouldn't it be neat if people that you meet
had shoes upon their feet and something to eat?
And wouldn't it be fine if all humankind had shelter?"

At one point, this peacemaker is described by his wife as "a consummate idealist." When describing himself in recent years, Wavy Gravy calls himself an "intuitive clown." Both are true and this remarkable documentary shows a man who walks his talk. As a holy fool, Wavy Gravy stands in a long spiritual tradition of persons who believe in positive change and are willing to call out the best in themselves and in others. At one point, this jester sums up the mission of his life in a short but poignant phrase: "Put your good where it does the most." Now there's a substantive and timely mantra for our time and all times. 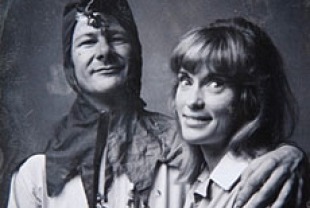 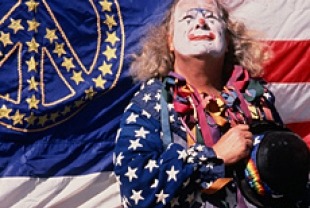 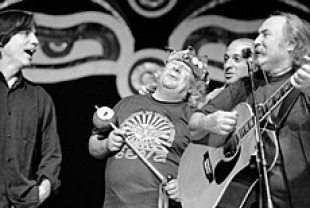