Directed by George Nolfi
A satisfying spiritual love story about the preciousness of free will and the lengths some human beings will go to be with their soul mate.

David Norris (Matt Damon) is a charismatic New York politician whose swiftly rising career gets derailed by a past action which is deemed disgraceful. On the night of his speech conceding the loss of his race for the Senate, he meets Elise (Emily Blunt) in the men's room. She's hiding from security after crashing a wedding. There is an immediate attraction between them. David is emboldened by her kiss and knows in his heart that she is his soul mate. Feeling at the top of his game, he makes the best and most honest speech of his life. He wants to give Elise credit for inspiring him but by then, she's left the building, and he doesn't have any way of reaching her.

Later, David sees her on a bus and she gives him her number. He knows that great things are in store for them in a life together in love. But some mysterious men, all wearing hats, have been following him around. They capture him and explain that they have another plan: one in which David and Elise are not meant to be together. These men are guardian angels who work for the adjustment bureau presided over by a Chairman. Their job is to make sure that everyone follows the plan mapped out for them by the Chairman. These guardian angels intervene in human affairs in simple everyday experiences like making a person miss a train, have coffee spilled on a shirt, or not receiving a phone call. When tracking someone they can walk through one door and miraculously come out on the other part of the city.

One of the head guardian angels burns Elise's number, and this riles David up so much that he spends three years taking the same bus in hopes of seeing her again. It pays off when he is reunited with her despite all the roadblocks the men in hats put in his way. One of the most powerful guardian angels (Terence Stamp) meets David and tells him that he must follow their plan in which he becomes President and Elise a world-class dancer (she directs a modern dance company). If he goes against the plan, they will make sure that her dreams are dashed and she will wind up teaching dance to small children.

The Adjustment Bureau is written and directed by George Nolfi and loosely based on a short story by science fiction writer Philip K. Dick. This imaginative and well-acted film mixes genres as a political drama, a science fiction tale, and a spiritual love story. At the heart of what transpires on the screen is the age-old philosophical question as to whether human beings have free will or are compelled to follow the plan mapped out by God. It is an odd experience to see guardian angels as enforcers keeping things in order and impeding men, women, and children from making their own way through a world of temptation, coincidences, and muddled meanings.

We actually much prefer the beneficent and compassionate angels in Wings of Desire or the playful ones in Michael to the overbearing presences in this film. But the magic that writer and director Nolfi was looking for in this project is there nonetheless in the convincing chemistry between Matt Damon as David and Emily Blunt as Elise. They make us care about the choices that these two make and the love that lifts them. The Adjustment Bureau proves that Emily Blunt is one of our finest and most gifted actresses, a real treasure!

Special features on the DVD include deleted and extended scenes; "Leaping through New York"; "Destined to Be"; "Becoming Elise"; and a feature commentary with writer/director George Nolfi. 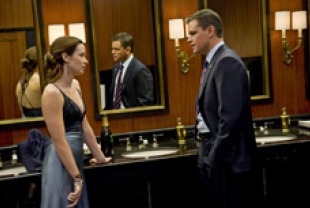 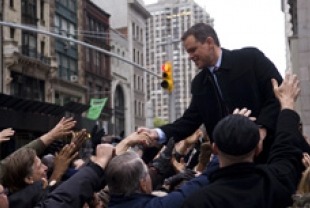 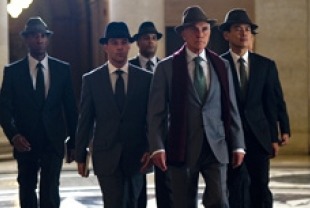