Directed by Abbas Kiarostami
A thought-provoking romantic drama about the mysteries of love and the formidable challenges of marriage.

James Miller (William Shimel) is a British author who is in Italy to promote his controversial art book. He contends that copies are often as good as the original and challenge us to see creativity in a fresh way. As he speaks, an unnamed woman (Juliette Binoche) arrives late with her bored son (Adrian Moore). She is a gallery owner eager to talk about art. The woman leaves her number.

They meet the next day and drive to Lucignano where original art and copies abound. He autographs several copies of his book and then she takes him for a coffee. When Miller exits to talk on his cell phone, the coffee shop proprietor assumes that he is her husband and begins a lecture on the mysteries of love and the challenges of marriage. When Miller returns, the woman speaks of him as her husband of 15 years. He does the same and soon we are wondering, Are they really husband and wife? Has their meeting as strangers been a concocted drama to bring some adventure to their marriage ?

We have been very impressed and have taken to heart the films of Abbas Kiarostami, including The Wind Will Carry Us, where he probes the mysteries of life and death; Ten, a parable about living in the present moment; and ABC Africa, a touching documentary about the orphans of Uganda. Certified Copy is the first film this sensitive and creative Iranian director has made outside his homeland.

In the second section of the film, we begin to see the character qualities of the writer and the art gallery owner rise to the surface: his emotional chilliness and cruelty and her emotional vibrancy and romantic nature. Their encounter with a bridal party speaks volumes about the sexual politics between them. Whether they are strangers or a married couple of 15 years, this is a relationship under siege. The lure of love brings many together but it often cannot be sustained in the midst of our busy, aggressive, and competitive lives.

Juliette Binoche won the Best Actress Award at Cannes (2010) for her performance in Certified Copy. It is an award well-deserved.

Special features on the DVD include director Abbas Kiarostami's rarely seen 1977 film The Report, which deals with similar themes; a new interview with Kiarostami; "Let's See 'Copia conforme'," an Italian documentary on the making of Certified Copy, featuring interviews with Kiarostami and actors Juliette Binoche and William Shimell; and a booklet featuring an essay by film critic Godfrey Cheshire. 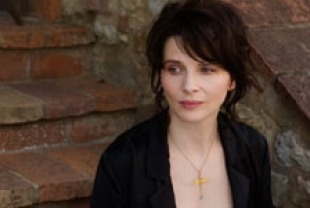 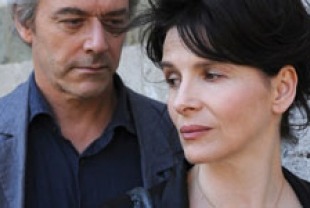