Directed by Jim Kolhberg
Touching story about the emotional uplift of music, the tenderizing of a family member's heart, and a father-son reconciliation.

Henry Sawyer (J. K. Simmons) was very close to his son Gabriel when he was a boy; they shared a love of the music of Bing Crosby and other Tin Pan Alley vocalists from the 1940s and 1950s. Henry and his wife Helen (Cara Seymour) have fond memories of their closeness to Gabriel as a smart and curious child. All of this comes to the fore when they receive a call from a hospital in 1986 informing them that their son, whom they haven't seen in 18 years, has a brain tumor. Gabriel (Lou Taylor Pucci) has been found wandering the streets of Manhattan. After surgery, his brain cannot recall or create any new memories; past, present, and future are the same for him. But he is fully aware and does respond to people with rhythms and witty comments. In terms of time, he is stuck in 1968. His parents move him to a long-term care facility and begin to regularly visit him.

Remembering how well he responded to music in the past, Henry finds Dianne (Julia Ormond), a musical therapist. She has worked with other brain-damaged individuals and helped them regain their mobility and voices. Whereas Henry has not been successful in reaching Gabriel through the old standards, Dianne plays the Beatles' "All You Need Is Love" and a look of excitement flashes across his face as his emotions are stirred once again by pop melodies. The sound seem to shatter his vacant expression, and he becomes fully animated as he sings the praises of the music. Gabriele is also enchanted whenever he sees Celia (Mia Maestro), an attractive cafeteria worker who responds positively to his flirtations and attention.

The Music Never Stops marks the directorial debut of Jim Kohlberg who has a keen sense of the important role of the emotions in the lives of family members. The excellent screenplay by Gwyn Lurie and Gary Marks is loosely based on the essay "The Last Hippie" by Oliver Sacks. You might recall that this neurologist and author provided the material for Awakenings

As Dianne continues to work with Gabriel playing music by Dylan and others, she discovers that he is a Deadhead or wild fan of the Grateful Dead. The only problem is that Henry can't stand rock music. Through flashbacks, we are transported to the 1960s and we see Gabriel as the head of a garage band, an antiwar zealot, and a Nixon hater. His father is a committed Republican who finds his son's counter-cultural beliefs and actions abhorrent.

After a heart attack, Henry softens a bit and begins to dutifully listen to the music his son loves. Gabriel tutors him in the rock songs that carried him through the past and ignited his passions. Sharing of music become a route to closeness and healing. The movie's high point is a father-son reconciliation like nothing you've ever seen before!

The Music Never Stopped is one of the best films of 2011, and the performance of J. K. Simmons (Juno's dad and the newspaper executive in the Spider-Man films) is worthy of an Academy Award nomination.

Special features on the DVD include an audio commentary with director Jim Kohlberg; interviews with author Oliver Sacks; cast interviews; and deleted scenes. 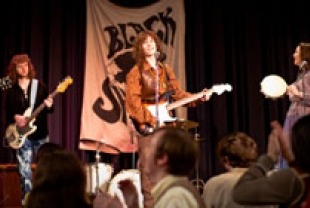 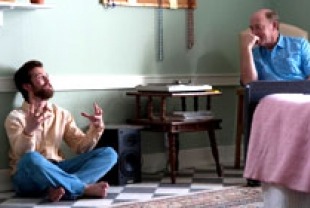 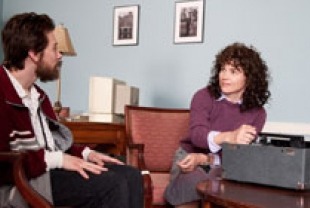