Directed by Paddy Considine
A grim and focused anatomy of anger carried into our hearts and minds by two intense performances by Peter Mullan and Olivia Coleman.

Joseph (Peter Mullan) is an unemployed widower who is unable to handle the volatile mix of liquor and the pent-up anger inside of him. The first victim of his rage is his dog whom he kicks to death while in a drunken stupor. Stumbling through the streets of Leeds, he is like a bomb ready to explode again and again. An Indian clerk tells him that he doesn't appreciate Joseph's critical remarks about him; shortly afterwards, the window in his business is shattered.

In a bar, Joseph gets mad at three young men for making too much noise and he brutally beats up one of them. Trying to get away, he hides in a thrift shop where Hannah (Olivia Coleman) works. She is a sincere Christian who senses his alienation from others and the hurt which lies behind his anger. She prays for him. But all she gets for her help is a vile and hostile diatribe against her piety, God, her escape from the real life of the poor and the downtrodden, and the meaningless of do-gooders.

Back at home in suburbia, Hannah is the target of her sick and twisted husband James (Eddie Marsan), a born-again Christian who humiliates and physically brutalizes her. When Joseph has a change of heart and apologizes for his derogatory comments on her life, she accepts his contrition and volunteers to pray over his dying friend (Robin Butler).

Actor Paddy Considine, known for playing the lead role in Jim Sheridan's In America, makes his directorial debut with this bleak and grim drama about the anger that fuels the lives and deeds of two very troubled people. Julian Johnson has written about this emotion:

"Anger burns up all that is noble. It is a consuming fire, born of the fires of destruction. At the end, it leaves the victim nothing but a wreck of his better self, burned out, blackened and dead, like forest trees over which a great fire has swept."

For a brief period of time, Joseph seems to have calmed down due to Hannah's presence in his life. But the habit of violence is so deep and pervasive within him that he explodes again, this time against the vicious pit bull owned by a nasty neighbor (Paul Popplewell). And Hannah's long-submerged rage comes out as well. Both of these vulnerable human beings suffer as a result of their enslavement to anger. As Louise Doud explains:

"Anger is the most futile emotion one can experience. It is totally negative and feeds on one's irrational, vindictive, and punitive nature. It accomplishes nothing but a wider rift between persons, a growing dissatisfaction with self, and empty feeling where loving understanding ought to be."

Tyrannosaur is a focused anatomy of the dark side of anger carried into our hearts and minds by two intense performances by Peter Mullan and Olivia Coleman.

Special features on the DVD include an audio commentary by director Paddy Considine with the producer, cinematographer, and editor; deleted scenes; "Dog Altogether" (Award-winning short film by Paddy Considine that inspired the feature); and the original theatrical trailer. 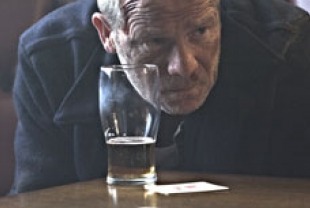 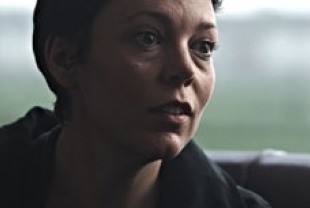 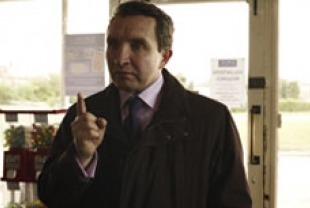