Mysteries of the Jesus Prayer

Directed by Norris Chumley
A documentary that presents a long-needed overview of Eastern spirituality in our time with its emphasis on prayer, silence, and living icons.

Eight years ago, Emmy award-winning theologian Norris Chumley and historian and Eastern Orthodox priest John A. McGuckin decided to make a pilgrimage to ancient monasteries where the mystical Jesus Prayer has been used by Eastern Christians for centuries. They begin at St. Anthony's near the Red Sea in Egypt, the oldest surviving monastery and church in the world. The two guests climb to the top of a mountain to view the cave where the ascetic St. Anthony the Great, known as the father of monasticism, lived for 46 years. The priest at St. Anthony's, Father Lazarus, explains the Jesus Prayer in the first of many discussions about it in the film.

Chumley and McGuckin's next stop is St. Catherine's on Mt. Sinai, built upon the site where Moses encountered God at the burning bush; a bush reputed to be the original one is still there. The two travelers see the famous icons of this place and attend prayers with the monks.

Their next stop is the famous Mt. Athos in Greece, home to many monasteries housing hermits and monks; women are not allowered there. Chumley and McGuckin talk to more monks about their devotional practices. On this island they have been praying and chanting for the last 1,000 years.
In Romania and Transylvania, they learn many monasteries are growing since the breakup of the Soviet Union. New churches are even being built. In Kiev in the Ukraine, they visit the cells of hermit monks, including some where monks were walled in and fed through a tiny opening; they spent all their time in the darkness in prayer. Chumley learns that some of the relics of Eastern Orthodox saints, bones kept in special containers, emit healing myrrh oil. "The saints," he's told, "continue working after their deaths."

The last stop on this unusual pilgrimage is Moscow, where Chumley and McGuckin visit the onion-domed churches. At an elaborate ceremony, attended by hundreds of monks, choirs, and devout Russians, the Russian patriarch, His Eminence Kyrill, censes the worshippers as a sign of their being living icons of God.

What do we learn about the Jesus Prayer in this documentary? the basic form of this Christian mantra is: "Lord Jesus Christ, Son of God, have mercy on me, a sinner." The Fathers and Mothers of the desert kept this prayer alive and over the centuries it has been used by lay as well as religious. It is often referred to as a prayer of the heart since it affirms and honors a close connection with Jesus. It is recommended that the words of the prayer be done in sync with the rhythm of our breathing and the beating of our heart. The inner stillness brought on by constant repetition of the Jesus Prayer enables us to enter into silence where we can draw closer to the presence of God.

Even after all these explanations, we are left with the essential mystery of this Christian prayer which cannot be imprisoned in words or confined in a conceptual zoo. Chumley's documentary presents a long-needed overview of Eastern Orthodox spirituality in our time with its emphasis on prayer, silence, and living icons. 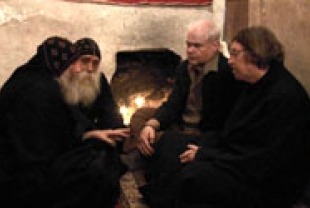