The Tree of Life

Directed by Terrence Malick
A bold film about a journey that stirs the soul as it sets the story of the creation of the universe alongside the intimate story of one family in the 1950s. 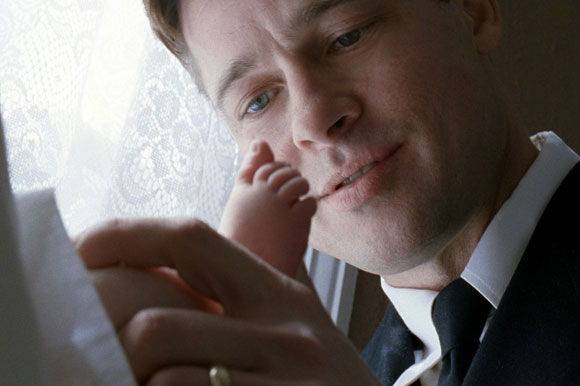 Come with us on the journey
from stardust to wonder.
No need for baggage;
everything is within.

Wisdom is your compass,
curiosity your spark!
Release your presumptions;
step into the dark of the void.

It's a mystery, a sacred mystery.
Awaken to the universe.
Surrender to the story
that's unfolding for you and me!

— James Conlon in The Sacred Impulse

Terrence Malick is a bold filmmaker who is not afraid to take risks as demonstrated by Badlands, Days of Heaven, The Thin Red Line, and The New World. He's known for creating visually stunning dramas that explore the depths and reach of human emotions. The Tree of Life is his most ambitious film yet as he takes us on a journey from stardust to wonder, exploring the natural world, the joys of new life, the impact of memories, and the dynamics of family life.

Using male and female voiceovers, the film asks the same questions that troubled Job and the writers of the Psalms in the Hebrew Bible. It opens appropriately with the Lord's answer to Job's suffering: "Where were you when I laid the foundation of the earth? . . . On what were its bases sunk, or who laid its cornerstone when the morning stars sang together and all the heavenly beings shouted for joy?" There are other questions, too, about suffering and death, toxins and violence, blame and shame. We are constantly challenged to determine who is speaking and to whom." How did you come to me? What disguise? How did I lose you? Did you know? Who are we to you? When did you first touch my heart? Can it happen to anybody? Are you watching me? Where were you?" These are the questions that are part and parcel of our experience of the mystery of God and of human nature.

The Tree of Life is an unconventional film that challenges moviegoers to stretch their minds and souls as they surrender to the drama that explores nature and spirit, past and present, and the abstract story of the universe set alongside the intimate story of one family. 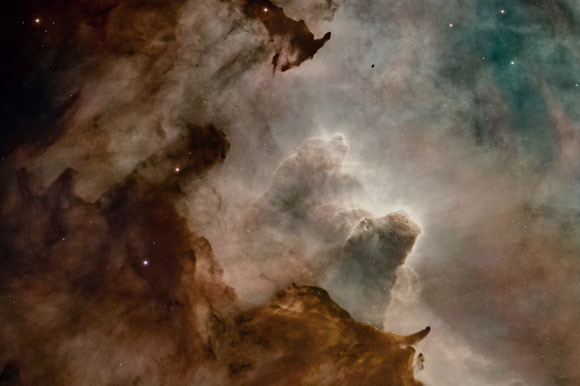 The Indians of South America teach that to become truly human, we should all make room inside ourselves for the immensities of the universe. Malick has structured his film to help us see that the galactic story is our story. Through the creative special effects of Douglas Trumbull, we are treated to a long sequence of imagery about the creation of the universe through the demise of dinosaurs.

We are deeply connected with the Earth, its oceans, plants, and animals. From the gardens we plant to the cities we build, we are co-creators with the Great Artist, trying to fashion lives of beauty, meaning, and love. 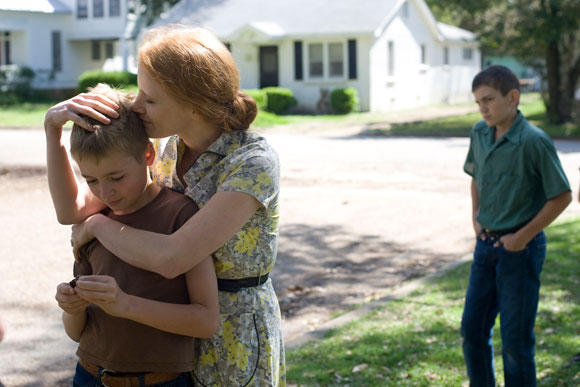 3.) Blessed Are Those in Pain and in Despair

Blessed is Earth
It shall flourish with radiant beauty.

Blessed are the waters
They will flow with clarity and quench our thirst.

Blessed are the trees
They shall absorb toxins
and give us breath.

Blessed are the birds
They shall soar stately in the sky.

Blessed are those in pain
They shall discover radiance in the dark.

Blessed are those who despair
They shall be enveloped in hopeful peace.

— James Conlon in At the Edge of Our Longing

Jack O'Brien (Hunter McCracken) is the joy of his mother (Jessica Chastain) and his father (Brad Pitt). Through a fluid series of scenes, we see him growing up and becoming his own person. The narrators of this glimpse into the life of one Texas family during the 1950s alert us to an organizing motif: each human being has to choose between the path of nature or the path of grace. For Jack the first is embodied in his father's need for control and the second in his mother's nurturing qualities.

Jack and his two younger brothers, R. L. (Laramie Eppler) and Steve (Tye Sheridan) have plenty of room to romp and get into trouble in their neighborhood. The earth shines with radiant beauty around them but they do not see it. They're busy doing what boys do when they have time to spare — tossing rocks into the windows of an empty house, launching a toad into space on a firecracker, tossing balls and wrestling. In one of the film's most vividly realistic scenes, Jack injures his trusting brother R.L. with his BB gun. What could have torn and twisted this first-born's innocent soul to make him so violent? 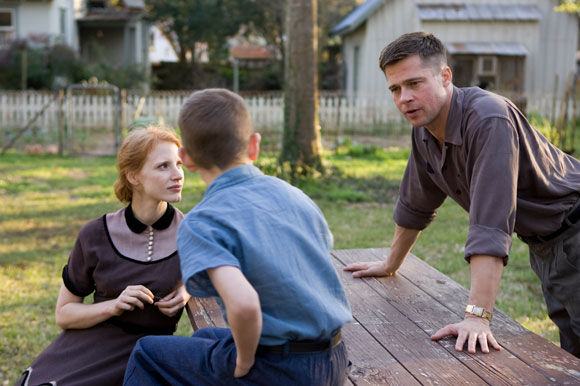 Mr. O'Brien, his rigid and domineering father is constantly criticizing Jack for his shoddy work in the yard and his behavior at the dinner table. One night his father explodes and hits R.L. before carrying him off to another room. The other boys scatter while their mother tries to control her anger.

This is just one time when Jack has to struggle with his love/ hate relationship to his father. At another, he even vows to kill him, but when he has a chance while his father is underneath the car, he can't act. The voiceover reminds us again of biblical laments: "All I want to do I can't do. I do what I hate." We sense that for the rest of his life, Jack will look cautiously on others, trying to discern whether they are going to attack him or not. As a grown man, he (Sean Penn) is a successful architect who works in a Houston high-rise and seems to be both isolated and lonely.

Jack, the adult, is haunted by the loss of R. L., who died when he was only 19 years old. He still feels guilt for tormenting him. Both of his parents are immobilized by the pain of grief. There are other scenes that give us perspectives on the pull of nature and grace in this family's story. Jack remembers images of his father playing the organ in the Catholic church, returning home from a trip to China with gifts for his three sons, and weeping in the backyard after losing his job and admitting his failure to fulfill his dreams. And there is that moment when Jack as a boy admits that he is more like his father than his mother. It's a sad realization for him. 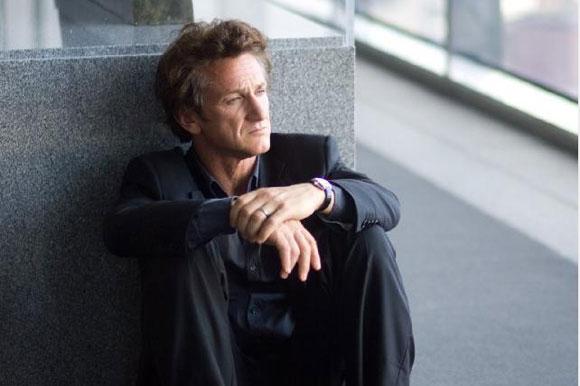 Good news.
But if you ask me what it is, I know not.
It is a track of feet in the snow.
It is a lantern showing a path.
It is a door set open.
— G. K. Chesterton in Ponderings from the Precipice by James Conlon

The universe and humans have great recuperative powers. No matter what the problem or the challenge, they have the capacity for renewal. Looking at the track of human feet in the snow, we can see the need to survive and even to flourish; it just takes a lot of patience and perseverance to keep on keeping on. For those who take the time to look, there is a lantern showing the path into the future. No matter how hard the fall or the mess, we can begin again. The good news of The Tree of Life is that a door is set open. All we have to do is walk through it and enter a world of grace.

Special features on the DVD include a featurette with Brad Pitt and others explaining The Tree of Life.