Directed by Jon Fevreau
A rousing action drama that mixes film genres and comes up with a winner propelled by strong performances by Daniel Craig and Harrison Ford.

It is easy to imagine someone trying to pitch this story to a film company. "You see it starts out as a Western with an archetypal loner riding into a town and receiving hostile looks as a stranger. But then the action swiftly changes into sci-fi thriller as alien spaceships bomb the town and yank citizens right up into the air while their loved ones watch helplessly. This mash-up of the Western and science fiction genres will appeal to action lovers of all stripes. But there must also be a strong and mysterious female character to get women to the theater. She will have to be different and offer an option that cannot be provided by the outsider."

There you have it in a nutshell: the perfect pitch for a film that works on the screen as an immensely entertaining movie filled with plenty of surprises.

The story is set in 1875 in Absolution, a desert town. Daniel Craig puts on his best Clint Eastwood glare as Jake Lonergan who finds himself alone in the wilderness with an abdominal wound and a shackle around his arm he can't explain. He has some sort of amnesia.

After a scrape with some nasty men, he heads into town and discovers that he is a wanted man. Obviously some shattering experience has brought on his memory loss. Another stranger in town is Ella (Olivia Wilde) who knows more about Jake than he knows himself. She wants to talk but he is not one to share many words.

The people who live in Absolution are used to guns going off in the streets but totally unprepared for an attack by hostile aliens. Among those who are shattered by the trauma are Colonel Dolarhyde (Harrison Ford), a power hungry cattle baron; Percy (Paul Dano), his irresponsible son who is always getting into trouble; a worry-wart saloon owner (Sam Rockwell) with a sultry Hispanic wife (Ana de la Reguera); the Sherriff (Keith Carradine) and his grandson (Noah Ringer); and the Colonel's right hand man (Adam Beach). The latter has an important role to play as translator when the townsfolk join with some Apache warriors who have also had some of their people snatched away by the hostile sky marauders. And just to add a religious perspective to the inexplicable happenings in Absolution is Meacham (Clancy Brown), a preacher who thinks the aliens are demons.

Cowboys & Aliens is a rousing action drama that contains two commendable performances by veteran actors Daniel Craig and Harrison Ford. The mash-up of two film genres works like a charm and ought to open the way to similar experiments by other filmmakers. Director Jon Favreau keeps the proceedings moving along at a good pace with more surprises than other survival stories.

Special features on the DVD include: Igniting the Sky: The Making of Cowboys & Aliens; Finding the Story; The Scope of the Spectacle; Outer-Space Icon; A Call to Action; Absolution; conversations with director Jon Favreau; a feature commentary with Favreau; U-Control; and BD-Live. 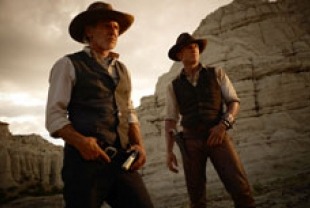 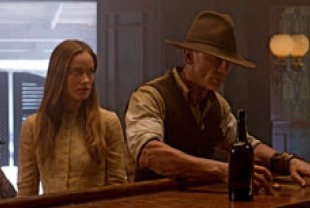 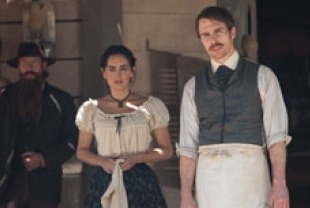 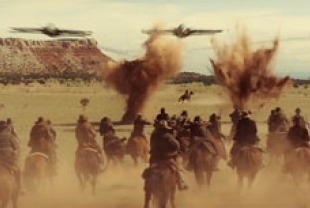